A 26 second video of a tractor pull.

Environmentalists' dislike of diesels are a visceral and emotion based hatred.

If you are a city dweller, then perhaps you can imagine a world without petroleum, a quiet, clean, electric based economy...except for the big rigs dropping off good and hauling away waste in Megalopolis. They are big. They are loud. They smell. Obviously, they must be evil.

Backstory
Gasoline engines mix air and gasoline (sometimes propane or natural gas) in a stoichiometricly correct ratio. Every carbon atom in the fuel gets exactly two oxygen atoms and is oxidized to carbon dioxide. Every two hydrogen atoms gets one oxygen atom and oxidizes to become a water molecule. Torque is modulated by limiting the amount of air (or air-fuel fog) into the cylinders.

A diesel engine, on the other hand, does not limit the air. Every compression stroke on a diesel bench-presses a full load of air. Torque is modulated by limiting the amount of fuel injected into the cylinder as the piston nears top-dead-center. It is very, very rare that a diesel engine's exhaust lacks vast amounts of free, unconsumed oxygen.

As a practical public-perception matter, the amount of torque and power an operator can get out of a diesel engine is limited by the public's tolerance for smoke.

The additional fuel does not impact the longevity of the motor.

Those images of diesel engines blowing up? That is due more to high RPM and the over-boost. Notice, this truck is spewing soot. The operator wants to make maximum power.

Carcinogens
Soot was identified as a potential carcinogen back in the 1990s.

Early attempts at using catalysts to capture and oxidize the soot were a mixed bag. Many catalyst were found that could make the ugly soot disappear but the exhaust was much richer in aromatic hydrocarbons and other, invisible carcinogens that had a stronger correlation to cancer than the soot they eliminated.

Power
Yep, absolutely beyond any shadow of a doubt, nearly any diesel can make more torque and power if you poke more fuel at it.

But how can it be more fuel efficient if you are sending uncombusted carbon out the stack? 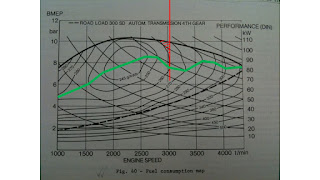 The east end of the 260 grams per kiloWatt-hour line falls conveniently close to the 3000 RPM line.

Adding enough fuel at 3000 RPM to take the Mean-Effective-Pressure (an arcane measure of torque) from 7.5 to 10 reduces the BSFC from 260g/kWh to 270g/kWh. That is, a 33% increase in power comes at a cost of 3.8% higher specific fuel consumption.

That is specific that that engine and that RPM but you can see that the topo lines north of the green line and east of 3000 RPM are very close to vertical indicating that more power is available at very little penalty to fuel economy. The BSFC maps of most four-stroke diesel engines should look similar.

Suppose....
Suppose you were in Capiche after Ebola and did not have enough running equipment to till the land.

Or suppose you were anywhere in Central Europe in the second half of the 1940s and did not have enough equipment to till the land.

Or today, suppose you were in the Indian subcontinent or Kazakhstan or the Ukraine and did not have enough running equipment to till the land and haul food to the market. Nor enough generation equipment to keep the lights on.

Do you suppose it is more/less moral to "roll coal" if it means you can pull one more plow "bottom" at the same speed or pull a tandem-trailer with little fuel consumption penalty and almost no durability penalty to your equipment?

That is an entirely different scenario than when one-hundred-seventy diesel taxicabs are stacked up at Roissy Airport waiting for fares. There is far more human exposure to the Roissy example than the post-WWII European economy struggling to feed itself after the best of its manhood had been gutted on the sandy plains west of Moscow.

History rhymes. It would be a shame if there wasn't a way to flip from one mode to the other. We never know when it will be needed.
Posted by Eaton Rapids Joe at 6:26 PM