The relationship between minimum wages and suicide rates 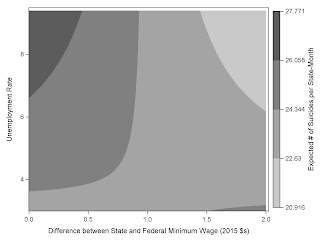 The news syndicates are full of a paper written by some professors at Emory University.

The sound-bite version of the paper is that raising the minimum wage by a dollar and hour reduces suicide rates by 6.6%. It makes me wonder why we simply don't raise the Federal minimum wage by $15.15 and make death by suicide extinct.

Unlike most of the journalists, I opened the study and read it. It contained some interesting tidbits. 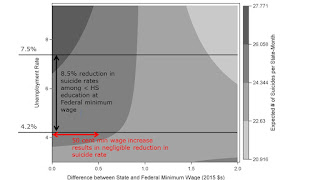 When the average unemployment rate is 7.5%, then the suicide rate is extremely sensitive to increases in minimum wage.

Also, when the unemployment rate is 4.2%, the suicide rate is extremely insensitive to increases in minimum wages.

7.5% and 4.2% were not chosen at random. Those rates are about the average for the Obama and Trump era respectively. 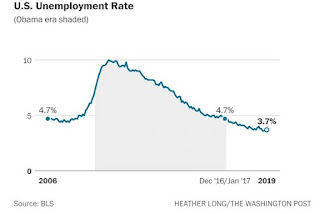 Crosstalk between variables
The study does not attempt to address the relationship between minimum wages and increased unemployment.

Raising the minimum wage can reduce the number of jobs available in the low wages sectors of the economy. It can also result in reduced hours of work made available to low wage workers as the break-even point changes and workers are sent home sooner.

The academic papers are all over the landscape with calculated cause-effect relationships. This one, looking at Seattle's recent increase in minimum wages suggests that raising the minimum wage from $11/hr to $13/hr eliminated 10,000/93,000 low-wage jobs. It should be noted that the Seattle job market was white-hot during this time but the job growth was primarily in highly paid tech sector.

The Seattle paper also points out that workers who don't lose their jobs can still lose money by having their hours cut.
"Point estimates of elasticities imply that, within Seattle,low-wage workers lost $3 from lost employment opportunities for every $1 they gain due to higher hourly wages."

I applaud the first paper cited for attempting to assess how durable the effects of increasing minimum wages were vis-a-vis suicide rates. However, I don't know if one year is the best lag time to assess. Businesses don't always go out-of-business within 365 days of unfavorable legislation being passed.

The take-home is that the relationship between minimum wages and suicide rates is more complicated (confounded, if you prefer) than the main-stream media reports. 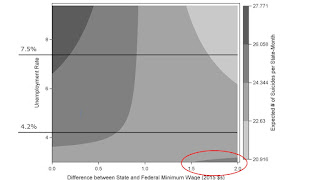 The original paper makes no attempt to explain the anomaly in the lower, right corner of their graphic. That anomaly, circled in red for your convenience, shows the suicide rate INCREASING at very, very low unemployment rates and increasing minimum wages.
Posted by Eaton Rapids Joe at 1:15 PM