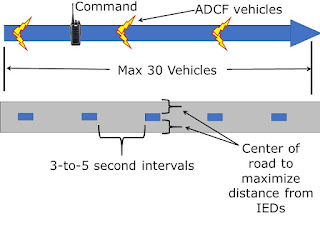 A question came up about convoys.

Current good-practice includes the following features:
Reasons:
Max of thirty...larger convoys can start tripping over themselves and it becomes a tangled mess if an alternate route must be followed. At a five second spacing, it takes a thirty vehicle convoy two-and-a-half minutes to pass a given point. The longer it takes, the longer hostiles have to orient and start shooting.
Gun ships...typically a truck with a couple of crew-served weapons in the bed. It is natural for people to look forward along the route. The gun ships are area denial, counter fire for the cone forward of their position in the convoy.
Command vehicle...Commander also tends to look forward. He can see and respond to events unfolding around the majority of the convoy that is ahead of him. Also less exposed to attacks.
Three-to-five second spacing...to minimize chain reaction accidents. Vehicles can drive around disabled vehicles in front of them.
Center of roadbed...self evident

This is not the last word on how to configure a convoy, but it is a good start and is from information that is widely available on the internet.

And just for fun