The girls are happy!

Mrs ERJ and Belladonna were grounded.

Mrs ERJ's vehicle went Tango Uniform three or four weeks ago.  Belladonna's was down for ten days.  Four drivers and two of our three vehicles were in the shop for an extended period of time.

It is all good now.  Both vehicles are back on the road and the girls are very happy.

Mrs ERJ's ride
Mrs ERJ's ride would not go into reverse.  The situation rapidly degraded.  In short order it did not want to shift  out of park.

We took the vehicle to Wilder's Automotive in Eaton Rapids.  He charges a half-hour hoist time for diagnostics, which is about $40.  He called us later that day.  He was not able to figure out the problem.  He recommended that we take it to Lansing Transmission.  He did not charge us the half-hour saying, "I am not going to charge you because I was not able to diagnose anything."

Mrs ERJ called Lansing Transmission.  We were able to get it into gear.  We were met by Stacy and Lori who were taking their break.  They fiddled with the minivan and were very encouraging.  They said that there was a position sensor (gear selection)  internal to the transmission and the repair would be between $300 and $500.

The reason it took so long to get the minivan repaired was two-fold.  Transmission shops that are widely heralded as being honorable have more business than they can turn over.  The second issue is that one of the mechanics (Lori) strained her shoulder and she was put on office duty.

The bill came out to a bit more than $600.  They ran into another issue. 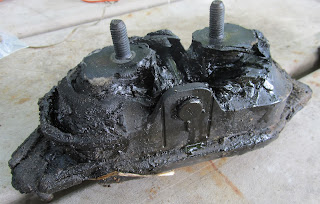 This motor mount is supposed to incorporate a fluid damping element.  The mount blew out (the vehicle was originally a rental unit from New Jersey, draw your own conclusions).  They replaced this mount which took the cost above the original estimate.

Belladonna's ride
The timing chain ate the timing gear.  The engine is an "interference" engine.  Consequently, the pistons and the valves tried to cohabitate the same space at the same time.

The engine ate itself.

The good news is that it happened 170 yards from our driveway rather than downtown Grand Rapids.

He did say that an engine swap would be about $2000.  A quick look on Craigslist suggested that a comparable vehicle would be about $4000.  The smart money would probably not dump $2000 into an "$1800" vehicle but this has been a good car and Bella likes it.  I don't always do the smart thing.

She was grounded for about 10 days while things were being sorted out.

Bella's vehicle is now being powered by an engine with 94,000 miles on it.   I will be tickled if it gets her through college and a year on the job.

Summary
We got through it.  The upside is that we communicated better.  One complication is that the S-10 has a grumpy transmission and the girls loath driving it.  I AM the only driver of the S-10.  We had to talk or I might be off on some errand when they needed to be somewhere.

One of Bella's friends loaned her a car so she could get to a couple of job interviews.  Thanks Erika!  The S-10 does not have air conditioning and Bella wanted to be "fresh" for the interviews.   Bella got the job.
Posted by Eaton Rapids Joe at 11:41 PM