Police departments across America are bracing for another wave of leftist-inspired violence as protesters gather in 28 cities in 19 states on Saturday for the national "March Against Sharia," the Associated Press reported. 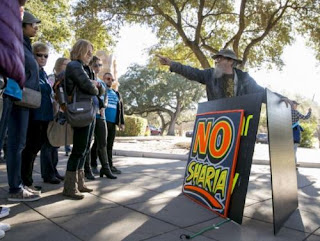 In New York City...Across the street, separated by police barricades and a few dozen police, a few hundred mostly young people, including labor activists and Jewish and Muslim activists...


I think this is a misuse of the Jewish brand/trademark.  How is it possible to be Jewish and to support Sharia law?
Do they know what the Koran says about women and their rights?

This will be filed in "You cannot make this stuff up."

Posted by Eaton Rapids Joe at 7:28 AM

Email ThisBlogThis!Share to TwitterShare to FacebookShare to Pinterest
Labels: dissonance, Sharia law, You cannot make this stuff up