Having lots of sex when you get older boosts brain power, scientists have discovered, with people who have regular sexual relations scoring better on verbal, visual and spatial perception tests.

Why sex provides a cognitive boost is not yet known. “We can only speculate whether this is driven by social or physical elements,” lead researcher Hayley Wright, from Coventry University, said in a statement. “But an area we would like to research further is the biological mechanisms that may influence this.”

The problem is that the researchers make two very common mistakes.   They assume correlation equals causality and they assume a direction of causality.

Correlation does not equal causality 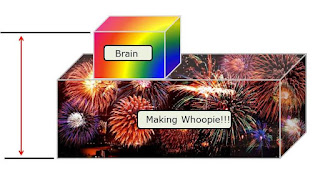 A correlation of 0.7 for this model is considered significant in many applications. 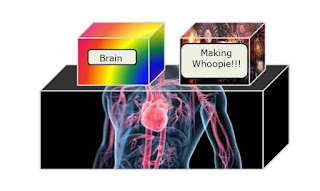 Another way that correlation can exist is when the two boxes share an underlying factor.  Suppose that cardio-vascular health impacts the ability to rub two neurons together and is important to physically enable Making Whoopie!!!  Large variation in cardio-vascular health would manifest as correlation between the height of the Brain box and the height of the Making Whoopie!!! box.

Direction of causality
Perhaps being intelligent increases one's odds of Making Whoopie!!!  Compare two couples.  In one couple the primary initiator is attentive to mood and is adept at manipulating the environment (fresh flowers, Rachmaninoff at 60dB, dishes all washed and put away, fresh sheets on the bed, dogs locked up for the night) to increase his/her odds.

The other couple's primary initiator is a clod.  His/her partner is rarely "in the mood".  Go figure.

Summary
I wonder if the researchers' answers to the author were tongue-in-cheek.  It may be that the researchers learned that good stories are more important than good science and good statistics when it comes to funding.

Science is too important to leave to scientists (who must seek funding).  Go forth and experiment: