Failures of the Market

The "Commons" situation is often given as a systemic failure or shortcoming of the market's ability to link cost and price.  This scenario is called the "Commons" problem because it was most notably highlighted by Garret Hardin in his essay, "Tragedy of the Commons".

I submit that the Tragedy of the Commons is more of a measuring problem than a market shortcoming.

The Chinese Take-out Restaurant
Eaton Rapids has a Chinese restaurant called the New China Buffet.  Many other restaurants have come and gone.  New China Buffet soldiers on.  They must be doing some things right.

My guess is that slightly more than half of their revenue is generated by the "Take out" side of the business.  Customers show up.  They are handed a three-well, clam-shell pod.  The management charges a single price per take-out.  The customer can fill it with anything they desire from the buffet tables with the single proviso that the lid must be able to close and stay closed without assistance.

Some customers take a modest amount of food, one meal's worth and no more.  The food groups are well represented in something approximating a balanced diet. 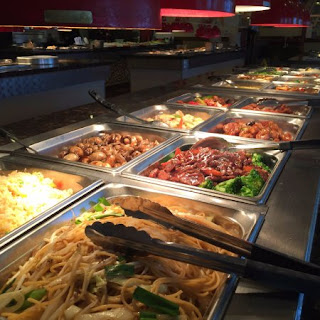 Other customers fill the clam-shell to bursting.  They fill it with meat.  Frankly, they are walking out with enough meat to supply five day's worth of meals.

Clearly, the restaurant is making a pile of money on each of the first kind of customer and losing money on the second type.  The management has to charge enough for "take-out" to withstand the monetary impact of a large run of the second type of customers.

In effect, the first group is subsidizing the second group.  As a customer who is more likely to be in the first group, I resent that and often choose to not eat Chinese food because I am paying an inflated price for the actual food I receive.

A measurement issue
Some Chinese restaurants acknowledge the problem and sell take-out by weight.  They might charge something like fifty cents an ounce.  That goes part-way toward addressing the issue but it misses the fact that beef costs $5 a pound while steamed rice has a cost of $0.134 per pound.

Near Infra Red Spectroscopy
Lucky for us we live in the ages of computers.

Farmers and grain elevators can monitor the protein content of grain by optically scanning the grain with Near Infrared light.

NIR reflectance spectroscopy is a rapid instrumental technique for the analysis of cereals both in the laboratory and on-line. It is based on absorption of NIR energy at specific wavelengths by peptide linkages between amino acids of protein molecules and at reference wavelenghts. Mathematical processing of the spectral data and calibration against a suitable reference method enables the protein content to be determined. Inclusion of a measurement at a wavelength corresponding to an absorption by water enables the result to be corrected automatically to a dry weight basis or on a standard moisture basis.   Source


One issue holding back the development of this technology is the cultural baggage of engineers.

The first commercial microwaves used military RADAR technology.  Having no other basis, the engineers set the specifications for wavelength to what was required for RADAR sensing of remote objects and Doppler calculations.  That resulted in a large percentage of microwave units being scrapped out and the required precision drove much cost into the process/product.  Later, Japanese and Korean engineers determined that water molecules are heated by a fairly wide range (compared to military specs) of wavelengths.  They were able to use common processes and produced no scrap.

The current NIR measurement technologies attempt to replicate NIST quality measurements.  My proposal is to have an NIR scanner calculate the percent protein in the meal.  Protein is the most expensive component of food and the amount of protein in the clam-shell can be calculated by multiplying the percent protein by the weight of the food.  This process does not require three decimal point accuracy.  It would be commercially viable if it were +/- 10% of actual protein content.

The customer who is attempting to gouge the restaurant by taking two pounds of meat out the door might pay $20 for the privilege.  Folks who want a simple, balanced meal might pay $5.  The restaurant can make money on both sets of customers.  Better measurement technology can provide the link between cost and price...thus salvaging the allocative efficiency of the market place.