Pokeweed as a source of emergency calories

One of the characteristics of engineers and the skilled trades people who work with them is that they will often flip problems on their head to make them easier to solve. 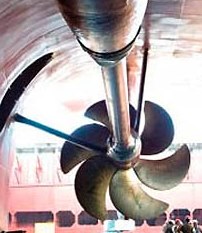 Suppose you were given the task of removing a gear or a propeller from a shaft.  Pulling on the propeller blade or the teeth of the gear will cause the propeller/gear to cock and bite into the shaft.  What does a millwright do?  He stands the problem on its head.  He knocks the shaft out of the propeller.  He can hit the shaft in the exact center with an enormous maul so it won't bind.  And if that is not enough he can heat the propeller to make the hole bigger.

If an expensive system is subject to catastrophic shocks then an engineer or an electrician might court failure by purposely putting a fragile fuse or shear-pin somewhere in the system.  The fuse or shear-pin would be cheap and placed in an easy to service location.  Again, a case of standing the problem on its head. If you cannot avoid failure than make it tolerable.

Pokeweed
Having to subsist on poke greens is the epitome of being destitute.  Pokeweed greens are a terrible source of calories. They don't start with very many (eleven Calories to the ounce) and then they must be boiled with two or three changes of water to remove the toxic compounds. 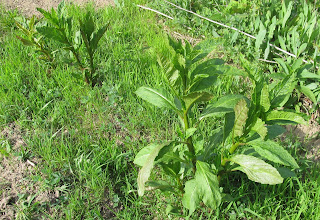 The plants grow with glorious abandon to heights of 8 feet or more with no care from humans.

If only they were edible.  But, alas, they are not.  One teaspoon (5 grams) of dried root is likely to kill an adult.

Flipping the problem on its head

There is another plant with fleshy roots that is a major food plant.  It, too, is toxic which is a major bonus in the tropics where this plant is grown.  The name of the plant is cassava and you know it as tapioca.

The native peoples who domesticated cassava do not attempt to leach the toxic elements from the roots.  Rather, they stood the problem on its head and figured out how to separate the most important edible component, the starch, from the root.

They peel the roots to remove all dirt and insoluble mineral particles.  They grind the roots, rupturing the cell walls.  Then they add water to form a slurry and agitate the slurry vigorously.  Next they let the slurry sit for several hours, perhaps even over night.  The soluble solids ferment and tiny CO2 bubbles initiate on every particle that is not starch.  Starch particles are rounded and CO2 does not like them.  The tiny bubbles act like personal flotation device and lift the "junk" to the surface leaving pure starch on the bottom of the settling vessel.  Good overview of the process HERE

Why not Pokeweed?
According to G. B. Frankforter (Amer. Jour. Pharm., 1897, p. 134) the fresh roots contain about 12% starch.  Cassava has about 20% so you are going to have to process about twice as much pokeweed root as cassava roots to get the same output.

Under dire, TEOTAWKI conditions there is no reason that starch from pokeweed could not supplement people or animal diets.  Eight pounds of roots (about what two plants would provide) contain one pound of starch or about 1800 Calories.

The tops of the roots could be whacked off and replanted for next year.  No insects.  No diseases.  No deer, woodchucks, rabbits of livestock messing with them.

Just something to keep in mind...although you might want to test your pokeweed starch on the animals before introducing much to your own diet.  Just saying.
Posted by Eaton Rapids Joe at 6:36 PM