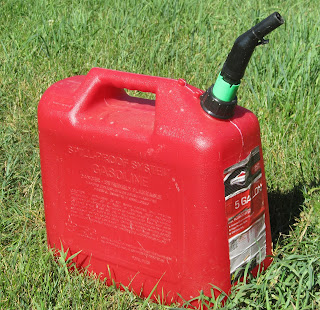 This can was clearly designed by a person who never used one to conform to specification designed to punish those who do.

One operates this unit by lifting it by the handle.  Five gallons of gas (31 pounds) weighs less than five gallons of water (40 pounds) but most people will need to use two hands to lift the container above belt height.

Two more hands, numbers five and six, are desirable for tipping the can so the spout is below the level of the gasoline and it can actually flow out of the can.

Six hands may sound like a lot, but it comes in handy as the gasoline flows out of the can at approximately one thimbleful every twenty seconds.  It takes a significant fraction of an hour to empty the can of its contents.  It is gonna feel like you and your two helpers are standing there forever.

Whaddya mean you are getting older and are not as strong as you used to be?

Whaddya mean you have wimminfolks in the house who struggle with lifting weights?

Whaddya mean you live in the sticks and don't have two stout friends to help you?

That ain't the regulator's problem.

WHY?
Cutting to the chase, the minions in the EPA believe that internal combustion machines are spawn of the devil and that people who use them are the devil's acolytes.  Punishing people who use petroleum powered mowers and chainsaws and boat motors and tillers and automobiles is a feature, not a bug.

The people who worm their way into the Washington D.C. power structure are urban people.  They cannot imagine my life.  They don't use five gallon gas cans.  They don't need to.
Our would-be rulers harbor the belief that everybody who is not-like-them is clinging to primitive, archaic, culture; proto-Amish if you will.  They figure that it is their mission to chivy, chafe and inconvenience us into conformance.

In the beginning
It started out innocently enough.  Pre-emissions control passenger cars emitted 20 grams (2/3s of an ounce) of hydrocarbons a mile (source).  Those hydrocarbons contributed to smog and other health hazards.

Governments figure that anything worth regulating is worth regulating comprehensively.  They also started to regulate the "evaporative" emissions.  Those are emissions that occur when the vehicle is not moving.  Then they regulated the gas vapors that pour out of the vehicle's gas tank when it is being refueled.  The vapors are displaced by the incoming fuel and were spilling out.

Then somebody noticed that every Billy-Bob and Boy-Howdy from Caribou, Maine to Needles, California was storing 20 gallons of gas in vented containers in their garage or shed.  Some of those sheds got to 140 degrees and significant amounts of gas boiled out over time.

Saving the earth
Gasoline is formulated according to the anticipated temperature.  Cold weather gasoline has significant amounts of butane in it.  Butane is a cheap source of energy.  Butane is volatile. Butane boils out of the gasoline.  Butane is a hydrocarbon.  Light hydrocarbons like methane have been implicated in man-made global warming (gasp!)

The irony is that "good" intentions are not enough.  Anywhere between two and eight ounces (60ml and 240ml) of fuel are spilled with every transfer due to the infernal awkwardness of the system.  Sometimes the secondary container gets knocked over and far more than 240ml spills.