1980:  Professor Andry paced the front of the classroom.  His frustration was palpable.

He had just handed back the mid-terms.  Two-thirds of the scores were below 40%.  The remaining third were almost acceptable at 70%.

"What is it going to take to get through to you that you need to understand this one simple, differential equation:  MXDDot + CXDot+ KX = F(t)?"

Half of the class was juniors.  The rest were seniors.  Many of the seniors were taking the class for the second (or third) time.

A student piped up (not me, BTW), "What is so special about that equation.  Why is every physical phenomena governed by that equation?"

Andry struck like a water moccasin:  "First of all, physical systems are not 'governed' by equations.  Equations describe physical phenomena."

"And to answer the rest of your question, there are three kinds of physical phenomena:
"Because so many "interesting" phenomena are described by the same differential equation, you will find an infinite number of metaphors.  Mass resembles induction.  Springs resemble capacitance.  Dampers resemble resistors."

Metaphors
I was recently reading an article about restoring the scores of California salmon streams that flow into the Pacific north of San Francisco.  I couldn't help but think that those streams were outstanding metaphors for our economy.

At one time it was commonly believed that dams would benefit salmon spawning.  It was believed that regulating the flow so that it was constant would be most beneficial.

The unintended consequence was that the constant stream cut a deep and narrow channel, just like a band saw.

The narrow channels intercepted very little sunlight...the driver of nearly all life on the planet.  The channel was devoid of pools and riffles, gravel beds of various coarseness, rocks to break the current and beds of seaweed.  They were a desert for salmon fry. 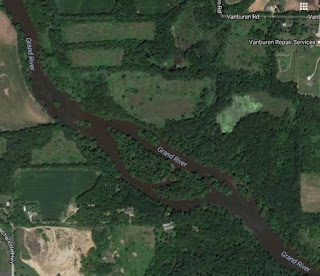 Before dams were installed across every stream, spring flooding would fill old channels with rock and gravel and would cut new meanders and channels.  The flooding would flush the silt out of gravel beds.  Stream beds were braids of old, criss-crossing channels.  Not only did they look like strips of bacon from the air but they intercepted huge amounts of sunlight and the gravel beds provided outstanding habitat for the pantheon of invertebrates that were the base of the food chain.

Like the one "lucky" channel of the salmon stream, certain "lucky" segments of the economy are in the process of capturing all of the flow. May I suggest that .GOV,  the healthcare industry and the financial industry are three of those "lucky" channels.

Professor Andry would probably predict that it is a fool's game to control dynamic systems with static solutions.  The stream will flood.  The regular "creative destruction" of floods and droughts will return, even though the first few iterations will be more destruction that creative.