Hello.  My name is Joe and I hate pumpkins.

I have many other character flaws but I will talk about those later.  Today, I want to talk about pumpkins.

My hatred of pumpkins started when I managed a community garden with 13 allotments.  12 of the gardeners planted the usual stuff, Swiss Chard, tomatoes, hot peppers, green onions, marigolds and the like.

One gardener planted pumpkins.  I think it was out of spite.


There are many problems with pumpkins.  They do not respect boundaries.  Try telling the pumpkin grower that it is their responsibility to keep the runners inside the boundaries of their own garden and you might as well talk to a wall.  I could accept their rampant growth if they produced as much per square foot as sweet potatoes....but they don't.

People who plant pumpkins believe in magic.  They never weed their plot.  Weeds make seeds.  Seeds infect other people's allotment.  The planters of pumpkins show up the week before Halloween and expect to harvest 20, perfect pumpkins even though they did not give them a lick of care after entrusting the seeds to the soil.

Pumpkins attract vandals.  Planting pumpkins and naively trusting that they will not be smashed or boosted is like putting a trailer park in central Kansas and not thinking about tornadoes.  Pumpkins are beacons that attract destructive teens just like decoys attract ducks.

Pumpkins are not edible.  I know this is a little thing in the scheme of things.  But why would you plant something that aspires to mimic blow-molded polyethylene?  Descriptions in seed catalogs speak of "handles" and "thin, hard rinds".  They speak of "fluorescent orange color" and "smooth waxy finish."

My mother tried to cook pumpkins once.  She mistook them for squash.  The pumpkin flesh wept.  When she pulled it out of the oven the casserole dish was filled with water and  a small, rectangular, sponge-like turd floated in the middle of the lake of tears.

This was not always the case.

Pumpkins once filled a very specific niche in the farm ecology. 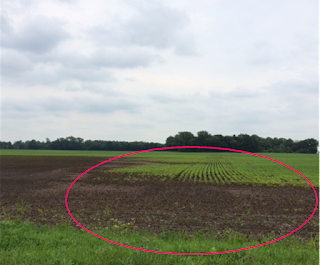 Pumpkins and winter squash are one of the crops that can be planted after spring flooding subsided.  Pumpkin and squash demand warm soil to germinate and thus their timing meshes well with the cessation of spring rains.

The farmer could survey his fields and plant pumpkins and squash in the bare patches in hopes of recovering some usable calories for his family and livestock.

There were hundreds, maybe thousands of strains of pumpkins and winter squash.

My name is Joe, and I still plant pumpkins.  I have no control over my pumpkin planting 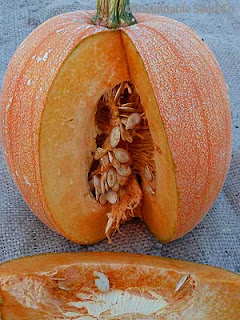 I grew Winter Luxury pumpkin one year and the woodchucks beat me to every one of them.  That should have been a hint.

The next year I grew Winter Luxury pumpkins I was able to save one ripe fruit.  I got busy.  The fruit got soft.  It still smelled good and there was no evidence of rot.

It turns out that the skin of Winter Luxury pumpkins is porous, like the rind on a cantaloupe.  The pumpkin was losing moisture.  It made outstanding roast squash/pumpkin.  No rectangular sponge-turd in the bottom of that casserole dish.  Woodchucks are smarter than you think. 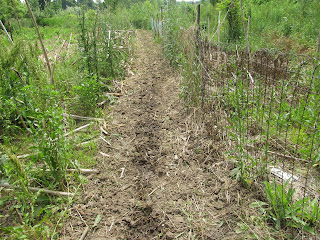 I planted my pumpkin seeds today.  I waited until there was nobody else at home to witness my weakness.

I made use of pumpkin's sprawling, extravagant man-spread.  I planted it in an area I was just too pooped to till up.  I will mow the weeds in a week.  These pumpkins will just have to fend for themselves. Veni, vidi, vici.

Now you will have to excuse me while I turn up the rap music and let the dogs out of the kennel.
Posted by Eaton Rapids Joe at 12:49 PM