A few articles came in via email.  One was about gardening atop bales of hay.  One was about restoring tropical forest.  One was about using biomass to generate electricity.  The common thread was the hidden (or not so hidden) subsidies that made the enterprise seem viable.

Hay bale gardening
The author tells of their success using 4'x6' round bales as the substrate for their garden.  Source

The jury is still out on my 2017 gardening season, but I can definitely attest to the fact that vegetables will grow in round hay bales. Our soil here in north central Texas is very alkaline with little actual topsoil. It’s amazing that anything grows, but bluebonnets and many other wild flowers do well. Mustang grapes and dewberries (a thorny vine blackberry) flourish. Plus there are wild plums, cactus, and mesquite pods that are edible.

I went the 4 X 6 round hay bale route because there are so many rotting older round bales in the fields. 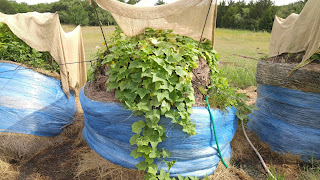 So what does this awesome process convert 150 pounds of protein...enough nutrients to fertilize 5000 square feet?  Looking at the photo above...I am guessing about 35 cucumbers.

Ok, ok.  They were rotting bales of hay.  Nobody was going to turn that into salad or soylant green or feed it to animals.  Never the less, those nutrients 25-6.5-27 pounds of NPK were removed from the hay field.

Here’s how it works. It takes six steps.
1. First, you start with soil. We identify what nutrition the soil lacks.
2. Then we identify what species we should be growing in this soil, depending on climate.
3. We then identify locally abundant biomass available in that region to give the soil whatever nourishment it needs. This is typically an agricultural or industrial byproduct — like chicken manure or press mud, a byproduct of sugar production — but it can be almost anything. We’ve made a rule that it must come from within 50 kilometers of the site, which means we have to be flexible.
4. Once we’ve amended the soil to a depth of one meter, we plant saplings that are up to 80 centimeters high, packing them in very densely — three to five saplings per square meter.
5. The forest itself must cover a 100-square-meter minimum area. This grows into a forest so dense that after eight months, sunlight can’t reach the ground. At this point, every drop of rain that falls is conserved, and every leaf that falls is converted into humus. The more the forest grows, the more it generates nutrients for itself, accelerating further growth. This density also means that individual trees begin competing for sunlight — another reason these forests grow so fast.
6. The forest needs to be watered and weeded for the first two or three years, at which point it becomes self-sustaining. After that, it’s best to disturb the forest as little as possible to allow its ecosystem, including animals, to become established.

That is a boat load of organic matter sequestered from SOMEWHERE.

One way that tropical ecosystems differ from temperate ecosystems is that the majority of the nutrients in a tropical forest are in the plant life and not in the soil.  Organic matter that falls and hits the ground is attacked by fungi, termites, arthropods and disappears within weeks.  It is either snapped up by plant roots or quickly leaches away.

Removing those nutrients directly impacts the biomass in the tropical forest.  There is not a "reserve" of nutrients in the soil that the plant roots can tap into.  All of the nutrients are in the biomass.  Remove the biomass and it will not grow back.

You just robbed Peter to pay Paul.  Peter is pissed.  Paul is happy and the pickpocket makes a commission.

Incidentally, the author of this article makes his living as a forestry consultant.  Do you think he is going to point out any of the negatives?

Burning biomass
Have you ever warmed yourself by burning wet wood?  I did not think so.  Ok, you want to argue this point....let me ask, was any of the wood in the fire dry or was it all green...every stick of it?

Burning wood chips makes thermodynamic sense ONLY if you have a way to dry them.  If you do not dry them but burn them "wet" they really don't contribute much net heat.  Little of the electricity that is generated in the plant is from the wood.