Live traps are handy to have around.

You can catch varmints that are eating your garden.

You can catch varmints that get into your trash.

You can catch squirrels, rabbits, woodchucks and so on for personal consumption.

If you have an accidental catch like a neighbor's cat or small dog then you can let it go.

They are handy but some of the most common ones benefit from a few tweaks to improve them. 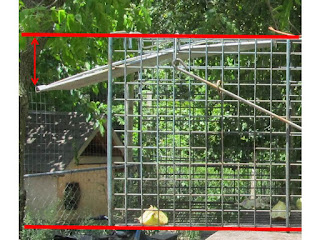 One problem with this particular style of trap is that the door droops down.  Big old Mr Raccoon or Mr Woodchuck can bump the door with their back on the way in.  The trigger disengages when their back lifts the door.  If the weight of the door  or the motion of the trigger rod spooks them they can easily escape because the door never closed enough to engage the lock.
The problem is exacerbated because when you do catch Mr Raccoon or Woodchuck, he pries up on the door as he tries to push-through to escape. These traps are built lightly enough that they can put a bend in the trap door. 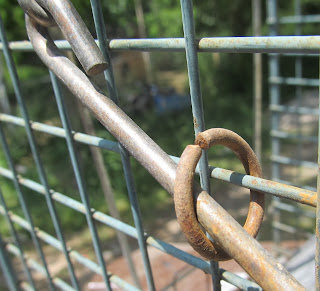 The trap originally had two of these split, support rings holding the rod between the tread plate and the trigger.  After catching a few animals one of them rotated around and no longer retained to the wire mesh of the cage.

It was little loss.  There is a better way.