This variety is a fairly new, disease resistant apple named WineCrisp.  It seems like all new releases have "...Crisp" in their name to capitalize on the popularity of HoneyCrisp. 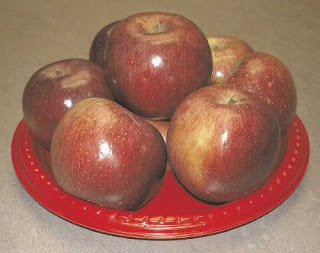 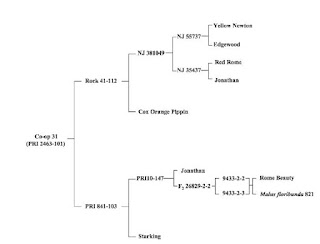 One of the oddities of this apple is that it is being touted as being very cold hardy which seems highly unlikely.

I think the claims originated with the breeders who were concerned that folks would look at the pedigree with Cox Orange Pippin and Starking (Red Delicious) as recent parents.  WineCrisp is a late apple and late apples tend to be less hardy than early apples.  When combined with the fact that the pedigree looks similar to Gala's (an apple with marginal hardiness across much of the mid-West) but in a much later apple, I think the breeders felt compelled to add a note about this apple "the tree appears to be cold-hardy for winter temperatures in Illinois and Indiana."

Thus you end up with nurseries in places like Chippewa Falls, Wisconsin selling WineCrisp based on on the original claim that morphing into "WineCrisp is a hardy" apple.  Caveat emptor.

Incidentally, HoneyCrisp IS a hardy apple, capable of handling -35 F when well grown and the fruit load is managed.


For what it is worth department
I was mowing in the serious orchard today.  I saw two young robins.  One was running along the ground like a chipmunk.  The other one was in the stock tank and paddling like heck to stay afloat.  I put him on top of a live trap in the sun to warm up and dry out.
Posted by Eaton Rapids Joe at 5:55 PM