The 6.5mm Arisaka or 6.5mm Japanese is an interesting cartridge for a few reasons.

It was introduced in 1899 and the bolt action rifle that fired it was state-of-the-art for its time.

Unsure of their metallurgy abilities, the Japanese took a design similar to the German Mauser and doubled the number of locking lugs from two primary to four primary lugs. With a +30" barrel it made a fine spear after mounting the bayonet on it.

At some point in WWII the Japanese decided that the 6.5mm round did not have enough killing power and introduced a second infantry round that was very similar to the British .303. Those darned Americans were way-hard to kill.

In retrospect, declining marksmanship was probably more of an issue than lack of killing power.

The US had a similar issue in the Korean War when the .30 Carbine gained full-auto capability and the round that mowed down Japanese Bushido warriors couldn't kill Chinese. Kids, freaking out when the Chinese attacked in waves went full auto and most of the rounds went high, smacking into the hill two klicks downrange.

The bullet that misses has no killing power unless you count the ones that land in Miss Susie's 4th birthday party across town.

The 6.5mm Grendel and 6.8mm SPC are very new chamberings intended to maximize downrange energy .AND. still fit in an AR-15 envelope.

The 6.5mm Arisaka is not a SAAMI defined round. The "official" max pressure is 42,000 psi which is probably a nod to the same, conservative decisions made by the Japanese in 1899.

The exigencies of war result in excessive variation in components. Dirt, mud and other debris can prevent a firearm from going into battery.

The generous chamber dimensions mean that brass life for the 6.5mm Arisaka is short for those of us who reload. The brass gets a work-out between expanding when fired and being cranked back down when full-length formed. One option, if you will only be shooting the round through a single rifle, is to resize just the neck.

The British engaged in a crash program to create weapons as WWII loomed over the horizon.

One of those weapons was the limpet mine, so named because it resembles a clam that adheres to structures like the hulls of ships that are moored.

Necessity is a mother.

The original plan called for specialty magnets but the Brits went with common, horse-shoe magnets because that was what was readily available.

Two major problems that had to be solved involved a robust timing mechanism and how to initiate that start of that mechanism.

Batteries are heavy. Salt water is both corrosive and conductive. 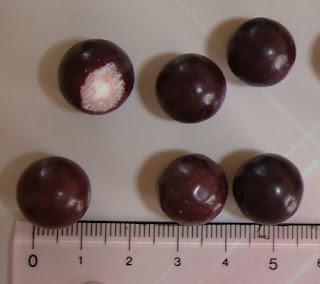 The solution was to separate the two contacts (or the hammer of a percussion igniter) with a small candy called "aniseed ball". The sugar-based candy dissolves at a very repeatable rate in cold water and worked just fine....

It started dissolving the second the frogman stepped into the water. Since frogmen are expensive and time consuming to train, Brits deemed it advisable to recycle them rather than sending them on one-time missions.

The solution was to encase the aniseed balls with a condom which the frogman stripped off the mechanism just before he swam away.

The jokes write themselves.

Nevertheless, I admire the fact that the Brits were able to field an effective weapon for less than a billion dollars in development costs.

"Brits discover that condoms delay premature events involving aniseed balls" or something like that.

Posted by Eaton Rapids Joe at 8:48 AM