May Theilgaard Watts once observed that nearly everybody feels a certain, visceral connection with the landscape of Denmark. She claimed it was due to the impact of the illustrated writings of Hans Christian Andersen. We recognize the Danish landscape from the stories. 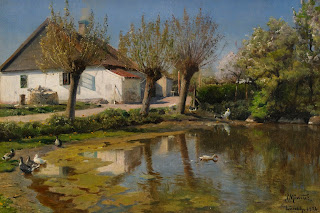 Pollard willow on the bank. Mønsted accurately captured the algae bloom in the water due to the high nutrient loading from the goose poop. He may have chosen this time of year for the painting because the water might look pretty nasty later. 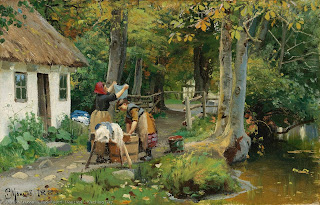 It seems crazy that people could build that close to water and not be hammered by mosquitoes. 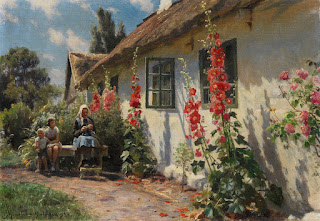 In the United States, holly hocks were usually planted by the outhouse so discerning guests did not need to ask. Of course, if it was urgent one could simple sweep downwind of the property and then follow one's nose.

Holly hocks are usually biennial. They bloom the second year and then die. They can be vigorous self-seeders.

Unfortunately, most common strains of holly hocks are susceptible to mildew. 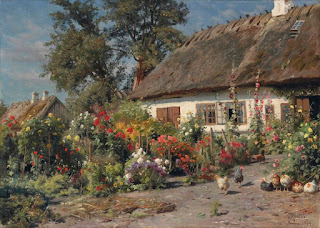 Many of Mønsted's pictures show thatched roofs. I picked this one because it shows the battens that are on the peak to provide wind-resistance and to hold down panels to cover the part of the roof that does not have overlapping bundles of thatch.

Posted by Eaton Rapids Joe at 8:57 AM