Remnant: The first Letter of Marque

Jarrell thought there is nothing glorious or inspiring about hard work.

As Dar and Owen pulled out of the drive to check out Twin Pines, Willie drove the tractor with the front-end loader out to the woodlot.

Mindful of Dar’s admonition that handguns are only for ‘...when you take a leak”, Jarrell slung the inexpensive, Mossberg bolt-action over his shoulder and jogged along afterward.

Willie was a artist with the tractor. He used the tip of the bale spear to lift the rope loop from the branch and lay the carcass on the ground. Then Jarrell held the loop while Willie slowly eased the full length of the spear through the loop, lifted the carcass and idled his way back to Frank’s front yard.

The plan was to whittle the carcasses into fifty-to-seventy pound chunks that were easy to handle. Frank had been laying out tarps on the ground so they had a clean place to stack the bloody chunks.

The sound of a truck and gravel popping beneath its tires as it slowed caught Frank’s attention. By all indications, the truck was slowing to enter Frank’s drive.

Pointing at Jarrell, he said “Pick up your rifle and slip on over to that tree” pointing to a massive Catalpa tree that graced his yard. The tree was about 60 feet from the drive.

Jarrell hustled to comply, settling into place as the truck came into view. He double-checked to ensure the scope was set at three-power, a round was in the chamber and the safety was engaged.

Willie was still perched in the seat of the tractor, motor idling to ensure hydraulic pressure kept the loader high in the air.

When Jarrell looked over, he saw Frank pointing the Arisaka directly at the driver through the windshield of the truck. The ancient rifle looked as long as a 2-by-4 stud to Jarrell.

“Lookit, I don’t want no trouble but you are gonna have to load that meat into my truck” the man said, sounding almost apologetic.

“What the fuck?” Frank said.

“I know you ain’t got no authorization but I can git you signed up. But first you are gonna have to put that meat in the back of my truck like I done told you” the man was significantly less pleasant now. Looking down the barrel of a rifle can knock the ‘shiny’ off the most polished of operators.

“You got until the count of three to be back in your truck and heading down my driveway” Frank said. His rifle never wavered.

Jarrell pointed the crosshairs of the scope pointed at the ground beneath the truck’s passenger door. The passenger appeared to be younger than the driver and seemed more tightly wound.

Even though Jarrell had his weapon in the pocket of his shoulder, he was not looking through the scope, he was looking over the top of it. He wanted to maintain over-all, situational awareness.

“….ONE...” Frank bellowed loudly enough for neighbors to hear.

The man did not move.

The man started rocking weight onto his forward foot....

BOOOMMM!!! Frank’s rifle went off and the driver spun.

The passenger started to exit the vehicle and Jarrell saw a shape in the boy’s hand.

The crosshairs lifted of their own accord and the trigger fired, unbidden. And Jarrell’s target shuddered.

Then Jarrell’s rifle fired again. He had racked in another shell without conscious thought and without lowering it from his shoulder.

Jarrell's target crumpled to the ground.

Watching the driver for ten seconds without saying a word, Frank finally said “Better drop your magazine and top it off. No telling how many other visitors we are likely to have today.

Jarrell was surprised to discover he had racked a third shell into the chamber after the second shot. He topped off the magazine from the white box of 150 grain Powerpoints Dar had left with him.

Then Jarrell looked at the twisted shape of the boy he had killed and he vomited.

Jarrell noticed something that seemed out-of-place when he looked into the grubby cab of the truck. It was a bright, white sheet of paper with writing on it.

Jarrell could no more ignore the piece of paper than he could stop breathing. He picked it up and started reading even though his hands were shaking violently. 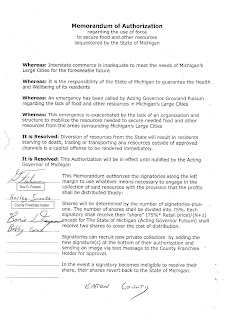 "What is it?" Frank asked. Mostly, he thought reading was a waste of time.

"These raiders are organized like a multi-level marketing organization" Jarrell said.