As promised, I went on a search-and-destroy mission at the hunting lease.

The target was Multiflora Rose bushes.

Like they say on the internet, it didn't happen if there are not pictures: 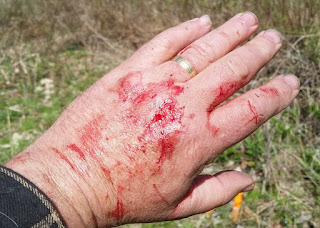 Move along. Nothing to see here. Just a leaky, old guy who takes 81 mg of aspirin a day.

Looks impressive, though. I particularly like the bottom picture. You can see a tiny thorn in the web of flesh between my thumb and the other fingers. After thoroughly washing up the backs of my hands have welts but no visible wounds.

I will go back in a week and take another whack at the ones I missed. By then the ones I cut will have wilted. 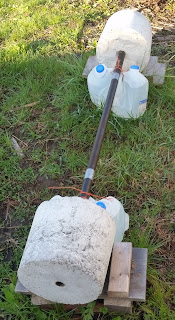 I missed noting that yesterday was a special day.

Forty years ago, April 16, 1981, I went to work for The Big Corporation. I was one of the few lucky ones. I retired thirty-two years later.

A substantial number of my cohorts were severed during non-stop down-sizings, relocations and one bankruptcy. I was very, very lucky to always find a chair when the music stopped.

The saddest example of somebody who did not find a chair was a peer who lost his job in maintenance and was assigned a supervising position in production. He hung himself. There are no winners in an organization that is imploding, just various degrees of losers.

Some of my assignments were pure joy. Two were agony including one where I lost 20 pounds in three months...not intentionally. Most were just-a-job.

Mrs ERJ flies to the un-named state on Tuesday.

She plans to stay for a month but that is very flexible. If other resources are found she might be home in a week. If things swirl the drain she is prepared to stay until no longer needed. 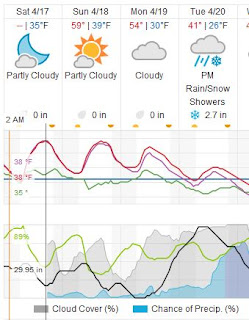