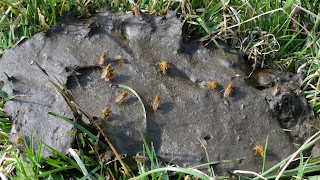 Golden Dung Beetles (Scathophaga stercoraria), literally Poop-eating decomposer. These flies show up in great abundance in the spring and their availability may be one of the toggles that limit the migration of bird species that are primarily insectivores.

Rumor has it that the meme "Do you have any grey poupon?" originated with them. 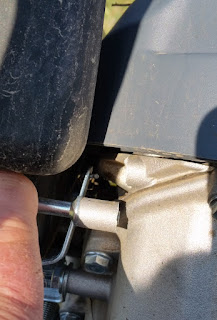 Closer examination revealed that one of the cast aluminum bosses that supported the gas tank had snapped. The throttle linkage was holding up one end of the gas tank.

I lashed the tank back into position with orange, baling twine and continued mowing.

I cut down a tree today. I had planted the tree even before we moved into the house.

The tree had been hammered by an ice-storm about three years ago.

I leaned a 12' ladder against the tree and cut the remaining limbs.

Unbeknownst to me, Mrs ERJ was watching from her chair in the living room.

One of the limbs fought back. The end hit the ground, bowed and then the butt end of the branch hit the ladder and tried to knock it off the tree.

I simultaneously dropped the saw, said a naughty word and grabbed the trunk of the tree.

The tree must have forgiven me as my hug was enough to arrest the arc of the ladder. After that, I scurried down the ladder like a squirrel.

Mrs ERJ was not amused. She prefers that her Easter miracles remain Biblical.

The installments during the coming week will have some technical errors. Some of it is accidental. Usually, when I have content that is this technical I have a team of consultants I bounce installments off-of. They point out errors and suggest improvements.

Even though the story is FICTION it may be enough to get me banned. If so, I don't want to implicate my technical advisors.

The other errors, if there are any, are there to avoid giving terrorists any usable script. So, if you are experienced enough to say "Hell no, that wouldn't work" please do not post corrections in comments.