How long do antibodies last in the human body? 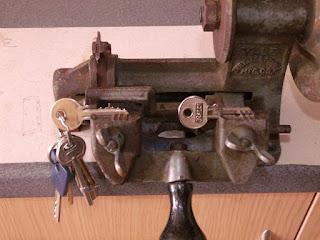 In 1918, a devastating influenza virus swept the world, killing tens of millions of people. Researchers have just discovered a relic of that pandemic: antibodies in some of the now elderly survivors.

The cells that make antibodies weren't thought to circulate in the blood for 90 years, at least not at a high enough concentration to be found. But Altschuler (a specialist in rehabilitative medicine) was persistent. He found 32 people who had been 3, 4 or 5 years old in 1918 and sent their blood samples to Crowe and the other immunologists and virologists.

"We actually had to find the cells floating around in the blood as if they were sentinels looking for a new infection," Crowe said.

And using some sophisticated new techniques, they found antibodies to the 1918 flu in every one of the 32 people they tested who were alive in 1918, and few if any antibodies in anyone born after 1925.       -Underlining mine.

First a very quick lesson on the immune system.

Antibodies are like keys. If a key gets stuffed into a lock (the pathogen) and broken off, the lock will not work.

There is a system of cells/organs in our bodies to manufacture these keys when a pathogen is found. One of them involves cells in the bloodstream "looking" for specific pathogens. That is what the researchers found. Those cells lock onto the pathogen and get filtered out by lymph nodes. The cell presents the pathogen to the key-making machine and turns it on. The key-making machine starts spitting out antibodies/keys.

So, while it may be true that relatively few Covid 19 antibodies are found three, six, twelve months after vaccination, a key point is that the Arsenal of Democracy is tooled up and ready to crank a brazillian copies out if some form of Covid presents itself.

Exceptions apply. Some people have feeble immune systems. Covid will randomly evolve and the keys will not be as good of a fit to future variants. Covid might be so effective at penetrating cell walls and hiding that the immune system gets a slow start.

Major point: Your immune system after having Covid or receiving vaccine is no longer a deer-in-the-headlights long past the three or six month timeline some folks bandy about as if it were a hard-stop.

Posted by Eaton Rapids Joe at 7:05 AM