Remnant: Does a bear know how to shit in the woods?

Willie pulled out his battered flip-phone and started punching in Lena’s number from memory.

Lena asked about the sounds of all the shooting and Willie explained with an economy of words. Then he said “I wanna borrow your egg sign and a coupla your chickens.”

Lena asked why and Willie explained.

Lena was willing to make the loans but it came with a few conditions. That is how Lena ended up in the ambush party.

The pickings for kill-sacks were limited, especially the ones between M-99 and the Sudak farm. The only decent choice was a half-mile east of the Sudak farm. It had no elevation advantage but the long drive was tightly bracketed by impenetrable willow and dogwood brush and it curved in a snake-like fashion several times before it reached the buildings.

Lena threw four chickens in one feed sack and four chunks of firewood in another. Willie pulled her sign off the post.

Willie attached it to the mailbox at the end of the drive with zip-ties.

Lena greeted Owen and Dar and commenced to staking out her girls. She tied lengths of monofilament fishing line to each chunk of firewood and then tied the other end to one leg of her chickens.

Then she pulled out her 20 gauge pump shotgun and asked Dar where he wanted her to set-up.

Jarrell drove the meat to town. He had well over 2000 pounds of meat. Not only had they carved the carcasses up into “chunks”, Dar had Jarrell scavenge the gut piles for hearts, livers, kidneys, lungs and fat. “They can grind it into the hamburger. Folks are hungry. They will be happy to get it.”

Having done what he could to salvage the situation in his own domaine, Mayor Wagnor started calling his fellow mayors to bring them up to speed.

He was more than a little bit pissed to learn that they already knew but had not bothered to share the info with him.

Charlotte, Potterville and Olivet are all on I-69 and had all been hit by raiders. Not just the outlying areas, the towns themselves.

Mayor Wagner did not spare Charlotte’s mayor the sharp edge of his tongue.

Mayor Gentes said “I don’t know why you are so upset. It is only property.”

That is when Mayor Wagner lost it.

Poor Mayor Gentes was forty years Wagner’s junior. Even though Charlotte was twice as big as Eaton Rapids, personality matters. Size of the fight in the dog, and all that.

“That only makes sense if you can replace that property” Wagner snarled.

“You swore an oath to protect the people of Charlotte and to uphold the law. By my lights you fucked up and failed both. Big time” Wagner said.

On the other end of the phone, Gentes withered. He saw being mayor as a resume enhancement. He had not signed on to make tough decisions. And now Wagner was jamming it up his backside.

“What would you have me do?” Gentes said.

“What would you tell the police to do if they were home intruders stealing things?” Wagner asked.

“But they have papers” Gentes defended himself.

Wagner shook his head. “Will that paper feed your babies when they are hungry? How do you know those papers are legit? Did you get a roll-out? Did anybody send you emails or certified letters? But even if they did, it is still ‘loss of property without due process’.”

“That paper isn’t fit to wipe your ass with.”

After making the round-robin of calls, Wagner realized he should have been preparing Eaton Rapids for defense.

Fortunately, there were still the remnants of the motley crew Dar had mustered.

Mayor informed the Gary Weber, man who seemed to be the leader, that the Cities of Charlotte and Potterville had already been raided. Wagner speculated that Eaton Rapids had been spared since it was not on a limited access road and raiders had been distracted by closer targets like Twin Pine ranch but that their luck would not hold.

That is when Jarrell pulled into town with his load of meat.

As he got out of the truck and slung “his” rifle over his shoulder, Gary tapped Jarrell’s shoulder. “Come with me. Dar texted me. Said you are a good man when the chips are down.”

Gary didn’t have a lot of resources to spread around. Eaton Rapids’ most valuable resource was the grocery store with the dough mixing equipment and the “rising” room but the submarine sandwich place was the closest target, being right downtown. The other two potential targets, Elsie’s pizza and the other pizza place were across the street from each other.

Gary’s fundamental problem was how to position defenders and avoid blue-on-blue or collateral casualties. Raiders might not be concerned about civilian casualties but Gary and the Mayor sure did. 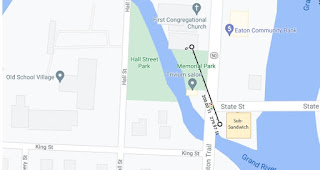 Gary sent Jarrell to the Red Ribbon Hall. The RRH had been the home of the not-so-secret Order of the Eastern Star and was now it own, stand-alone entity.

Flat roofed, fifty feet high, masonry building with a parapet around it. It was not directly across from the sub-sandwich building but some hundred yards north of it and across the street. The biggest advantages were its height and the fact that ricochets and misses would fly out over the river rather than into neighborhoods.

It was also the most northern of the town's defense. It was the closest to Lansing and would have both first and last crack at any raiders.

Weber hoped they would not be called into play.

Jarrell was just getting settled in when another head popped out of the roof access.

“Come to keep me company?” he asked.

Then he saw the AR-15 she was carrying. There was nothing tacti-cool about it. A simple optic sight appeared to be the only option on it. Melody was wearing a vest and had six magazines stashed in pockets.

“Do you know how to shoot that thing”? Jarrell asked.

Melody gave him a saucy smile and answered “Does a bear know how to shit in the woods?”
Posted by Eaton Rapids Joe at 12:30 AM