Donnie had a couple of his guys start the harassment of Pete’s store. They shot at windows and then moved and then shot again five minutes later. They weren’t taking any chances. They were shooting from behind solid features anywhere from 150-to-300 yards out.

Quinn packed up his mortar and ammo. The ammo went into the trailer behind the electric bike. The ammo was not heavy but it was extremely awkward even with the 6” impact fuses removed.

The mortar was not a joy to carry either. It came with legs, chains, base-plate and tube. The upside was that none of them were as heavy as “real” mortars because the short range ammo did not generate high pressures when fired. Still, they were awkward in the extreme.

Quinn picked up three volunteers at the M-99 mortar installation. Quinn pressed the two older volunteers into driving the electric bikes; Quinn’s and the bike assigned to the deceased M-99 crew. They were delighted. The fighter who had been driving Quinn’s bike was not as happy.

The third volunteer was Gimp. He was carrying a weapon Quinn had only seen in video games in movies. “Is that what I think it is?” Quinn asked.

“It is if you think it is an RPG-7, a rocket propelled grenade launcher.” Gimp said agreeably.

“Where did you get that?” Quinn asked.

“You know those two SUVs that raided us in May?” Gimp said. “I found the second vehicle. It had a few goodies in the trunk that I helped myself to.”

As Quinn’s forces were passing through the breached roadblock, Gimp asked “Do you mind if I make a suggestion?”

It was a tactful way of deferring to Quinn’s leadership and reassuring the fighters that Quinn was still in charge.

“Can we roll the logs back into place and jam wedges under them? That will slow down anybody who tries to approach us from the rear.”

It added ten minutes to the trip but Quinn could see the benefit of not being attacked from their six. It would be quite a surprise for any vehicle flying up M-99 with their lights off.

The crew inch-wormed their way north on M-99 then east on Holt Road then north on Gilbert road. The bikes had a most-efficient speed that was significantly faster than the fighters could hike. So they bounded ahead to the point fighter and then parked until the drag caught up.

The bikes could not travel the entire distance because the fighters had to cut cross-country for the last leg of the trip. The old geezers did more than their share, though. They helped hump some of the mortar shells that last leg.

Sam walked out to the middle lane of M-99 and used the laser range finder which indicated a range of 370 yards to the target.

The crew set up the mortar at 75 degrees. Quinn volunteered to “spot” the rounds and report back via radio. There was some degree of risk as there was a chance that the first round could obliterate the spotter if it were far enough out.

The eastern horizon was just starting to get a rosy glow as Quinn eased into the position he selected to spot from. It was to his advantage that he was familiar with the area. This was the first area he had plied with Dysen’s cookies.

If any of the neighbors noticed him sneaking through their trailer park, none of them bothered to mention it.

Chernovsky wanted all forces to attack at “Deer-thirty”. His thinking was that the hostiles would have been up for 24 hours by then and would not have fast reactions. It would be easy to get inside of, and stay ahead of their O-O-D-A loop. 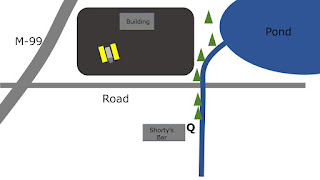 Quinn reported back that the two buses had sandwiched the fuel truck and that some of the occupants of the buses had deployed in the surrounding area.

“It would be nice if we could sweep them all into one pile before we mortared the shit out of them.” Quinn said. Not good radio discipline, but heck, he was tired too.

Gimp suggested to Jason that he move a hundred yards closer to the target and rapid fire a couple of magazines at every feature that looked like it might conceal a hostile, and then haul ass back to the mortar. It was Gimp’s experience that rats scurry back to their comfort zone rather than attack.

Before Jason left, Gimp asked “Is there was any way to not fuze the first few rounds? I want to use the first few shots as dummy, spotter rounds so the gomers aren’t tipped off.”

That is when Jason realized he needed to give Gimp a two minute, crash course on firing the Capiche-standard mortar.

The nose cone locked onto the round with a quarter-turn, clockwise bayonet style attachment. Then, to arm the fuze, the six-inch long impact probe also needed to be turned an additional quarter-turn clockwise so the paint stripes lined up.

Sam said, “No problems. We got this.”

Gimp radioed Quinn and told him about the change in plans. Quinn would radio when he wanted to start the party. Jason would start shooting. Sam would send the first dummy round down-range when Jason changed out his first magazine.

“You are going to have to look sharp. The first round is a dummy and it won’t go off.”

Quinn had a command radio. He had an over-ride set that allowed chatter on Chernovsky’s channel to cut in. When the first reports from Steve’s store came in that they were initiating attack, Quinn dropped the over-ride and radioed Gimp and Jason. “Start the party.”

The incoming gunfire from the northwest had a galvanizing effect on the hostiles. Cigarettes were tossed down. There was a mad scramble back to the bus. Many of the hostiles were not even carrying firearms.

They started shooting back at the first lull in Jason’s firing. Quinn heard the muted “Thump” of the mortar launching a round. Quinn began a slow, silent count to fifteen. Right on cue he heard the thump of the round striking the ground. But damned if he could see where it landed.

Searching with his binos in the direction he heard the impact, he finally picked up where the round had landed in the salmon-melon colored light of the rising sun. The first round Sam had fired was the pink, practice round.

“Add fifty, traverse one hundred to the right and send one more. Then prepare to fire for effect.” Quinn said.