The thunder of the detonation rolled across the quiet night sky of Capiche and Eaton Rapids.

Shortly afterwards, Tim reported “The command and control center is secure for the time being.”

Chernovsky consulted with Gimp on the open channel. “Mr Sullivan. We don’t seem to be where we can be most useful. This might be a good time for us to move.”

Gimp replied. “Affirmative. I think I should head up to Pete’s store and the best place for you is the command-and-control center.”

Chernovsky said “Good plan. You are closer to Pete’s store than I am.”

“Tim,” Chernovsky broadcast “I will be off the net for about ten minutes. Inform the team on Canfield to drop back to your position and to bring all of their weapons. Call the team on Bell Hwy and have them position a mile north of you. Also mobilize all of our transportation, starting with Di Carnie. We have chess pieces on the wrong squares.”

Chernovsky gave Janelle a kiss. “It sounds like your surprise in your mom’s store worked. I hope the mortar shells are as awesome.”

“Take care of yourself.” Janelle said. It had been a long time since she had fallen in love. She surprised herself by tearing up. It was rare for her emotions to be so close to the surface.

Chernovsky rode his mountain bike like a madman. He took the roads and paths least likely to be guarded by hostiles. It hardly seemed credible that they would have guards on them but it didn’t take any longer to take the safer paths and more than one game had been lost by a single player making one, careless decision.

Wade Hawk and Larry Tomanica were in the planning room when Chernovsky came in, sweating like a race horse. They had a crude map spread out on the steel table and magnets in place marking Capiche forces and the reported positions of hostile forces.

Transmissions from human intel kept flowing into Tim. Tim reported that half of the force had continued southwest on I-69 toward Charlotte.

Chernovsky said “Wake up Seraph. Tell him to call Charlotte and Potterville. Let them know they might get company.”

“Don’t ya think it is a little late for that?” Hawk asked.

“Probably is. Should have done it sooner. But there is a small chance that the invaders got delayed. And wouldn’t YOU want to know?”

As an afterthought, Chernovsky asked Tim to wake up Benicio and bring him up-to-date.

Tomanica, who had been silent and weighing the value of military objectives spoke up. “I think they might be targeting the Amish.”

Chernovsky cursed. “Tim! Do we have any way to get a hold of the Amish?”

Tim said “Not that I know of.”

“Wake up Dmitri. Give him that task. Maybe he knows somebody out that way.” Chernovsky delegated and then instantly displaced that problem with the one that was immediately at-hand. Except, he decided he needed to leave teams in-place along most of Capiche’s western frontier in case the hostiles were planning a pincer play.

The Columbia Hwy Observation Post team could fall back and harry the invaders who had settled into Steve’s store.

M-99 was wide open. The only team that was under-utilized was Quinn’s team but moving Quinn back to M-99 still left hostile assets camped at the I-96/M-99 exit and hostiles in uncontested possession of the Pray Church store and Pete’s store.

Chernovsky asked Tim to get Quinn, Donnie and Gimp on a side channel for a meeting.

Chernovsky laid out the problem and said “I am open to suggestions.”

Gimp spoke up first. “Definitely move the Columbia Road team to overwatch Steve’s store and to harry them with fire to keep them bottled up and out-of-play.”

“Then have Quinn slide over from Smith Road to pin down the team at Pete’s store.” Gimp said.

Chernovsky moved the magnets on the table to align the way Gimp suggested. He studied them in the dim, red light.

“That makes all the sense in the world from a defensive standpoint but ignores the fact that they can reinforce from their reserves at M-99 and I-96, much less the forces west of here. I need a plan with more reach.” Chernovsky announced.

Unfortunately, nobody had anticipated an attack with this level of resources. The only store that was booby-trapped had been Kate’s store. Outside of a siege, five fighters attempting to routing fifty defenders from a fixed position was a good recipe for suicide.

Chernovsky’s admonition reminded them that they probably did not have time to make a siege work.

They continued to look at the table.

Then Quinn piped up. “Donnie, did the raider cut any of the logging chains securing the roadblock?”

“Nope. Manuel dropped him before he had a chance.” Donnie said.

“What if Donnie hands the Waverly Road position over to local forces. I know those guys. They are solid.” Quinn said.

“Then Donnie moves his team to Skinner Cemetery which is within mortar range of Pete’s store. From there, he harries the hostiles until transportation moves half of the M-99 rounds to his position.”

I take my team and swing by the M-99 post. I take all of my mortar rounds and half of the M-99 rounds. We move up to the hostile reserve forces and mortar the shit out of them.” Quinn finished.

“How many mortar rounds would that be?” Chernovsky asked as he considered the proposal.

“We have seven and half of the M-99 supply would add another seven rounds for a total of fourteen.” Quinn said.

“Why should you attack the reserves and not my team?” Donnie asked.

“Because my team has the most experience firing the mortars. Besides, last time I had your back and you had all the fun. Now it is your turn to watch my back.” Quinn said. 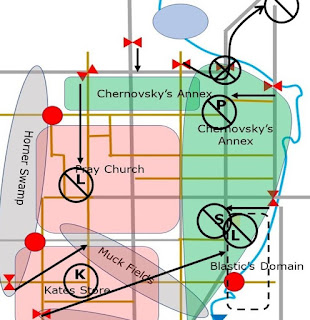 Chernovsky did not have a lot of options. The crew discussed it for ten minutes and a few minor details were ironed out.

“Can everybody be in position by sunrise?” Chernovsky asked. “I want the attacks to be simultaneous. Confusion is our friend.”

“No sweat, boss.” Quinn said, delighted to be out of garrison duty. “Five guys, five miles, two-hundred fifty pounds of gear. No problem.”