Bang for the Buck 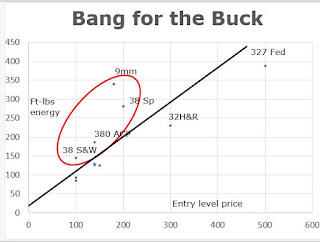 There is a fair amount of interest in .32 handguns. Some of the interest is based in personal or family history. Some is because of their inherent shootability  and easy of carry.

If .32s are so appealing, why aren't there more of them out there?

One reason is that they are on the wrong side of the Bang-for-the-Buck line.

If you plot out the Bang-for-the-Buck, you will see that the 9mm Parabellum offers the most bang-per-dollar. You aren't just buying the bullet. First you have to buy the platform that launches the bullet. It should come as no surprise that the 9mm is a very, very popular choice.

The .380 ACP in a Hi-Point handgun is cliche but it always goes bang, has as much energy as the .32 H&R and the ammo can be found everywhere.

The .38 S&W was eclipsed by the .38 Special and handguns in the chambering are historical legacies.

No, really. If the firearm is a family heirloom then the cost to the shooter is ZERO. And the .32 S&W Short and .32 S&W Long are very pleasant to shoot.

For example, the .32 Long gives up about 35% in energy to the .380 ACP but the combination of less powder and a longer barrel means less muzzle blast.

Some people believe that the shape of a revolver "finds their hand" more quickly than the shape of a semiautomatic. That could be an great reason if you carry your firearm in a purse, for instance.

The pedestrian velocities of the .32s means that the bullets will not expand, but they will certainly have plenty of penetration.

When the .32s evolved, the metallurgy and designs did not support high pressure rounds. Conversely, medical science did not recognize bacteria nor were their antibiotics. Getting shot in the torso usually meant you were going to die. Maybe not in the next fifteen seconds, but within the next fifteen days. Only a total loony-tune took those kinds of odds.

Even today, most rational people don't want to get shot. Crime is a job or a business venture for most thugs. The cost-benefit ratio takes a major hit when the intended victim starts putting holes in the businessman.

Granted, there are some drugged up lunatics out there. But if your choice is grampa's .32 Hopkins and Allen or taking selfies with the bad-guy, I think the .32 revolver is the better choice.
Posted by Eaton Rapids Joe at 10:18 PM