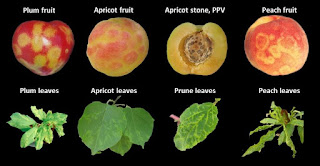 Scientists long speculated that the "junk" DNA had been inserted into the human genome by some mysterious process. An equal mystery is, why is it still in the human genome? If it caused even a slight evolutionary disadvantage, one would expect those carriers to be long gone.

Sharka Virus
Is there a more perfectly named virus than the virus that causes Plum Pox? SHARKA!

Traditional breeding techniques hit the wall when breeding for Sharka resistance. The virus emerged in the Balkans during WWI and there are no known sources of natural resistance*. How do you breed for resistance when you cannot find any parents with resistance?

How did they make HoneySweet immune?


The resistance is due to RNA silencing, which is a natural process in plants that gives them some adaptive protection against viruses. In the silencing process, the introduced PPV coat protein gene induces the plant to break down the coat protein, which prevents virus infection. This is a natural mechanism that plants use not only for virus resistance, but also to regulate many normal cell processes.

It is not much of a jump in logic to assume that the viral DNA we carry around was inserted into our cells by the same kinds of bacteria used by the ARS scientists. Remember, at the cellular and molecular level the numbers are astronomical and even very, very low odds events happen with regularity.

The irony is that the plum HoneySweet is failing commercially because consumers are freaked by the thought of eating viral DNA.

I got news for them. 98% of their DNA is "viral" DNA. 98% of the DNA in the free-range chicken they ate today was originally "viral" DNA. Probably ditto for the mesclun and almond salad.

Description of HoneySweet plum from the patent application: 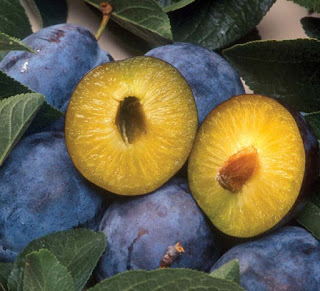 
*Prunus domestica clutivar Jojo appears to have some resistance to Sharka but even when it is not infected...it shows symptoms of Sharka. Strange. Makes a fellow go "Hmmm!"

There are also some varieties that show modest qualitative resistance to Sharka. It may be that they are less attractive to aphids or other vectors than the more susceptible varieties. Example, cv "Vision" showed less Sharka infection (only 25%) when grown in an infected orchard for several years than many other cultivars.
Posted by Eaton Rapids Joe at 6:44 PM