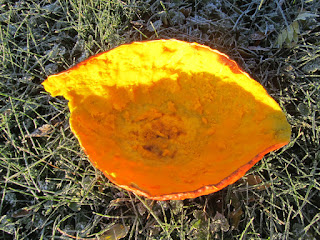 Hubbard Squash was a great favorite of my maternal grandmother. Not only are they huge and capable of feeding a large number of people, but they taste good.

I think part of the attraction was that her branch of the family settled in Hubbardston, Michigan after fleeing the Irish Potato Famine.

After splitting the squash in two and scooping out the seeds, it put the halves on a large cookie sheet and baked in the oven at 300F for 80 minutes.

Overcome by sloth, I turned off the oven and went to bed.

This morning, I was stunned to find that the edible parts had separated from the rind upon cooling. The rind shown in the image was not scraped. There was a small amount of edible material adhering but at least 95% of the good stuff lifted away.

Dad's bath day
Today was Dad's bath day. That was one of the reasons I stayed in Michigan. Dad does not do well with change.

Including the laundry, it took two hours.

Pruning trees
I started pruning trees. One of my goals is to prune the White Pine upwind of the house. They were originally planted as a wind-break but the lower limbs died and are now a fire hazard.

That is going much faster than expected. I am not done but I made a good start.

Fed the cows
I took a round-bale out to Sprite's cows. They were happy to see me.

Grocery shopping
I reloaded the outside freezer with frozen pizza. Kubota had friends over last night and they wiped me out.

Don't tell Mrs ERJ, but I picked up a half-gallon of ice-cream. Living large. 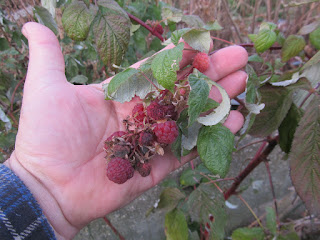 I still have some late raspberries hanging on.