Man is a social beast 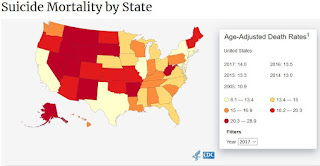 The outliers in the good direction are Nebraska, North Dakota and Minnesota.

The outliers in the bad direction are West Virginia, New Hampshire and Rhode Island.

West Virginia's economy is in the septic tank due to Obama destroying the coal industry.

The other states are harder to explain. It will be interesting to see if the crisis in farm revenues will move Nebraska out of the extreme outlier position.

It would be interesting to look at some pairings. Minnesota vs. New Hampshire...access to mental health services, time spent on social media, clustering of events...

The social media facet is particularly interesting. Are people substituting on-line relationships for meat-space relationships? Is there a numerical relationship between hours-per-week spent in cyberspace and the rate of suicide attempts?