Sprite is in the position of having to liquidate her cattle holdings.

She arrived at that decision back in October. She consulted with somebody in the trade and they suggested that prices would probably be higher in December, so she kept her finger off the trigger.

It looks like the person Sprite talked to was right, the prices bobbed up almost $20/hundred. 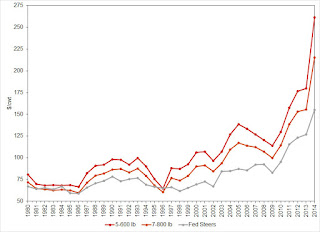 According the the University of Nebraska, prices skyrocketed in the 2011-2014 time-frame because of a drought pushing many cattle producers into liquidating their herds. Initially, liquidation exerts downward pressure on prices as all the mama-cows hit the market but then the limited number of calves cause it to spike.

It can take three or four years to rebuild numbers of mama cows.

2019 was a horrible year for hay and grain through much of the corn belt.

The only think keeping corn prices from blowing through the roof is the huge overhang in the pork market due to China is not importing US pork. Even though you don't see it at the supermarket, yet, the pork market is saturated and prices have to get soft. Soft prices means some producers will fold and reduce production. Fewer hogs means less buying pressure on corn.

The fly-in-the-ointment for cattle producers is the effect cheap pork chops will have on beef prices as various cuts of meat compete side-by-side in the grocery store. A tsunami of pork will beat down beef prices causing even more beef producers to liquidate.

Sprite's current plan is to sell most of her cows and her bull in December. Feed the calves (hay + creep feed grain) plus one boss-cow (hay) through the winter. Graze them on pasture until August and then pull the plug on them.

Part of what is influencing Sprite is the labor requirements of feeding cattle hay and grain. She could reduce that labor for part of the year if she reduced numbers and rotationally grazed them through the growing season. She could run six paddocks and rotate about once a week. Feed some hay during the July/August slump. Once the fence posts are pounded into the ground, there is not much labor beyond moving the water and letting the cattle into a new paddock when the old one is sufficiently grazed down.

If she wants to work extra hard, she can mow each paddock as they move out after June first.
Posted by Eaton Rapids Joe at 8:57 PM