The dose makes the poison
Poop, in excess is a form of pollution.

Poop, in the proper amount and location is a resource.

Surely, the same can be said for almost everything: Humor, intelligence, youthful exuberance... 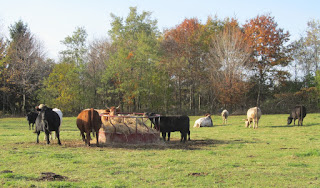 The Captain's/Sprite's cattle are still on my pasture. The grass has been eaten down short and they are eating round-bales of hay.

A ton of alfalfa hay is reputed to return 19 pounds of nitrogen, 6 pounds of phosphorous and 48 pounds of potassium to the soil. Grass hay contributes a bit less fertility. 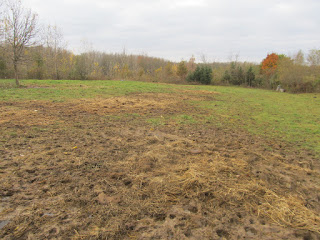 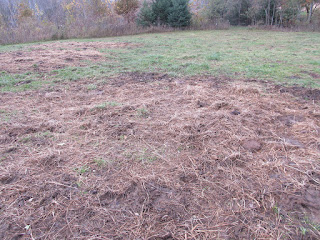 The anatomy of where hay has been fed resembles a bulls-eye target.

The ten-ring is about eight feet in diameter and is a six inch deep thatch of waste hay. Much of it was hay that was in contact with the ground. Much of the rest is hay that was in the outer layers of the bale. If not moved, the six inches of hay will smother the grass beneath it. Furthermore, seed that is planted will not drill through to mineral dirt and will perish in the first dry week of summer.

The next ring is ground that is pugged or trampled into mud.

The third ring is exactly 1.05 cow-lengths out from where the hay-feeder ended and is super-enriched with poop and urine.

Beyond the third ring are trails leading to the water, salt and shade that are rich in poop and urine.


You can manage your rotations by the appearance of the poop. The pile of poop in the first picture is from hay made from overly mature grass. The high lignin and fiber content makes the poop stiff and it piles high.

The second picture is from grass that is under-mature. As a grazer, you are giving up production if you let the animals graze the sward too soon.

Managers who are experienced at grazing cattle suggest that you apply the brakes or accelerator based on the appearance of the poop. If the poop is too tall, harvest some paddocks in front of the herd for hay to catch them up to the sweet-spot in maturity.

If the poops are too flat and blowy, feed some hay to slow down their rotation and let the grass catch up.

The rate of sward growth is very, very, very dependent on rainfall. It is not something that is easy to calculate. Consequently, management means looking at the output (poop) and using it to make decisions.

The ideal poop is about 1.5"-to-2" high and spreads out "like a sheet cake".  Chocolate, we presume.

Managing poop so it is a resource instead of pollution involves moving the hay feeder so the bulls-eyes are on less-fertile portions of the pasture. In my case, I have some clay-shelves that were exposed by erosion. It only makes sense to move the feeder about thirty feet down the length of that clay shelf every time I feed a new bale. 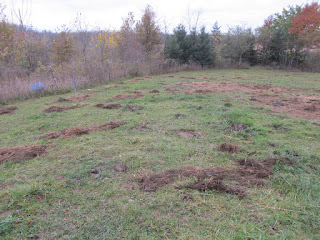 I also moved the thatch of spoiled hay from the middle of the former feeder location so it is less likely to smother the grass beneath it. It is quite a work-out for fore-arms and shoulders.

The trampled areas immediately outside of where the feeder location is a good place to seed in new grass varieties or legumes.

I am looking at some festulolium (cv. Fojtan or Duo) and creeping alfalfa (cv. Matrix) for frost seeding in 2020. Even though the creeping alfalfa only yields 90% of other alfalfas, it still makes more mass and protein than any other alternative. Also, by grazing the alfalfa I will not lose the typical 10%-to-25% of leaves that happens when hay is overly dry. The leaves are the most nutritious part of the alfalfa forage.

I also considering planting meadow brome (Bromus biebersteinii) but am a little bit spooked by stories of it taking a long time to establish. I would love comments from anybody out there who has grazed meadow brome.
Posted by Eaton Rapids Joe at 9:22 PM