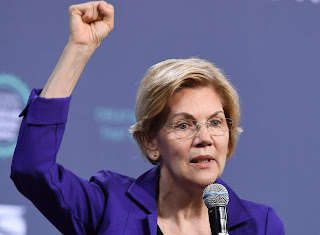 It is a rare politician who does not have a strong, pro-urban bias. That is where the votes are.

When they promise to make life "better" for us, they invariably have a picture in their head of some utopian city.

I want the name of that city.

Is it Los Angeles? Does Elizabeth Warren want to turn every place Americans live into LA?

Maybe San Francisco? Pandering to the environmental zealots usually entails moving humans into high-density feed-lots and returning the remaining 99% of the land area into pristine wilderness.

Maybe Washington D.C.? If D.C. it begs the question, who pays? Washington D.C. funds itself via a protection racket. "Pay us money and maybe nothing bad happens to your business, family, home or health. Maybe." In a zero-sum-game it is impossible for every city to be like Washington D.C.

Part of what triggered this post is that I was in sleepy, little East Lansing a couple of nights ago. Parking lots that were crumbling asphalt three years ago are now seven story parking ramps. If they could not afford to maintain asphalt/gravel then how can they afford to maintain multi-story structures?

Two story buildings were replaced with eight story buildings. The only way that makes sense is "free money" and captive markets courtesy of Student Loans.

Bernie and Liz, tell me, which city?
Posted by Eaton Rapids Joe at 5:13 PM