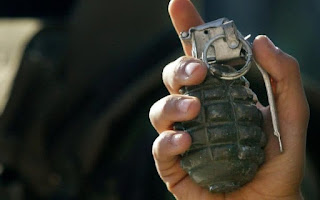 Abstract:
America does not recognize it but we are on the brink of a very ugly divorce.  We have been duped into retaining Chum and Churn as our attorneys.  They are doing everything they can to make the separation as rancorous as possible with the goal of lining their own pockets, Robert Mugabe style.

Normal people look at me and raise one eyebrow.

"What are you preparing for?"  they ask.

"Don't you feel kind of stupid?" they ask.  "Nothing has happened, yet."

Then I ask, "Did I ever tell you about Jimbo?"

And if they have the time, I tell them about Jimbo.

Living Large
Jimbo made good money.  He, as an individual, grossed about four times the US household median income.  He, his wife and his five (yes, five) boys lived in an exclusive suburb in the northeast corner of Wayne County.  The suburb's first name was Grosse, probably due to the monstrous size of the houses.

Jimbo was proud of his earning ability and the fact that his wife was high maintenance.  But even 4X the US average was not quite enough.  Every three years he would remortgage the house to extract the equity that rising housing prices magically created and use it to pay off the maxed out credit cards.  If I remember correctly he was usually able to rake out $25K-to-$35K every few years.

Life was good.  Jimbo worked his butt off.  His wife started several "businesses" and invariably put them into the ditch.  Nobody cared.  She was doing it for entertainment and for something to talk about at happy hour.  She was the classic dilettante.

The bank was apologetic.  "Mr Jimbo, you currently owe more on your house than it is worth.  We cannot, in good conscience, loan you more money."

Jimbo called around and, indeed, his house was now worth less than it had been worth the last time he had used it as a piggy bank.  The Jimbo ranch was upside-down

Telling Mrs Jimbo
It did not go well.

Jimbo told her that they would have to tighten their belts.  In fact, they should lock up the credit cards and forget they even had them for the next six months.  Not only did they have to live within their means, they had to live BELOW their means so they could make larger than minimum payments to get a little bit of budgetary breathing room.

Mrs Jimbo had never had to budget before.  Ever.  In. Her. Life.

Mr Grenade is not your friend when you pull the pin.  Mrs Jimbo was not Jimbo's friend after he told her there was no more money.

In fact, he will be insulted and feel victimized if he receives a 14% raise, a raise larger than any other raise he ever received.  He will look for enemies under every rock.  He will start shooting holes in the bottom of the collective life boat.  He will pull the pin and drop Mr Grenade into the bilge.

To Mrs Jimbo, money was love.  When Jimbo told her that there was not enough money, in her mind there was only one possible scenario:  Jimbo had a girlfriend and did not love her any more.

She filed for divorce.

Jimbo was blindsided.  He tried reasoning with her.  He told her about housing markets, collateral, etc.  It got no traction.  She had run MANY businesses and that had NEVER been a factor.

She was unmoved.  Be damned if she let Jimbo's new piece of fluff replace her.

He was shaking his head as he told me that.  He said she went completely irrational whenever he tried to talk to her about money.  It was as if she had just kicked a Yellow Jacket nest and did not have brains to run away.  The Yellow Jackets kept stinging her and making her more and more enraged.

Mr and Mrs Jimbo did end up divorced.  Jimbo moved into a duplex in Sterling Heights that was about a step-and-a-half above a trailer park.  Mrs Jimbo was forced to move out of the house after nine months of not being able to make payments.  She also moved to Sterling Heights and the kids went to a school close to where their father lived.  Seven lives were shredded.

Why is Jimbo's story relevant?

So I ask you, gentle reader, to consider the couples you know who have been divorced.  Perhaps 90% of them have been civil.  Perhaps 10% of them have been toxic...maybe even nuclear.  If the media and the deep state are acting as Chum and Churn, what will our cities and towns look like when 10% (or 20% or 30%...because we know folks compare notes) go Mrs Jimbo and drop Mr Grenade into the bilge?

Nothing has happened
Yet.
Posted by Eaton Rapids Joe at 6:58 PM