Highly placed sources informed the Eaton Rapids Joe Blog that the Democratic National Convention is so concerned about man-made global warming that they are diverting funding from political purposes to research mitigating the effects of MMGW  on the North American economies. 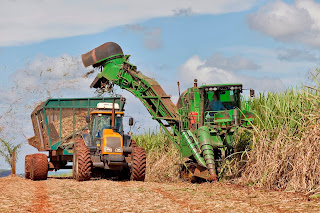 Professor Pierre Bismark and Professor Shasha K. Toon of the University of the Dakotas and University of Saskatchewan respectively informed the ERJ blog that they have been given funding to research growing sugar cane and oil palm in Saskatchewan, North Dakota and South Dakota.

A secondary objective is to investigate a polyculture of rice, tilapia and alligators.

"Since it is a cast-iron fact that global temperatures will rise by very large amounts, it is only rational to prepare local economies.  The economies of the Dakotas and Saskatchewan are primarily agricultural.  Therefore we need to find crops to replace canola, barley, sunflowers and wheat." said Bernie Gravely the new head of the DNC.

"There comes a time when you have to stop talking and posturing and put your money where your mouth is." the former Senator concluded.

President Hurrumph, President Neato and Prime Minister True-dat, upstaged by the opposition parties, responded by loosening restrictions on the passage of genetic materials between the three nations.  For example, Canada will now allow the free passage of any species that grows within 1500 km of its southern border.  Thus, it will allow free passage of persimmons, Chestnut Oak, Pecan trees, Trifoliate Orange and similar trees.  The intent is to lead the duck.

In a similar way, the United States will allow OTH (Other Than Human) genetic material to enter the United States from Central America as long as it originates from within 1500 km of the US southern border.
Posted by Eaton Rapids Joe at 3:30 AM