That thermal fuse (on a dishwasher)  is the manufacturer's way to sell most people a new dishwasher. They last for a planned amount of time...

Never attribute to malice what could be caused by stupidity (or ego, or carelessness or compartmentalization or...)
Once upon a time I worked for a maker of consumer products and was slightly involved in warranty work.

I think it is safe to share this information because it is over thirty years old, neither of the marketing outlets are still operating and I will not identify either of the parties.

The paddle switch did not have a single failure within the warranty period despite being installed in nearly half a million vehicles.  Said another way, zero failures in six billion miles of operation.

What was the difference?
Both switches were specified by styling.  The "designers" who chose the chromed toggle switch thought it bespoke of elegance and refinement.  Making the switch work was not their problem.

The "designers" who chose the paddle switch were aiming for a younger audience and this switch seemed more "modern" than the chrome toggle switch.

There were some very large difference internal to the switch.

The Chromed Toggle Switch
The chromed toggle switch had contacts that were compressed into contact.  When they lifted off the contacts drew an arc which produced much heat and softened the plastic.  That was not a big deal if sufficient time elapsed before the switch was cycled again.  The plastic could cool down and get hard.  If it was cycled while the plastic was still soft the contact would be pushed into the plastic and would not be tall enough to have sufficient compression with the contact on the switch arm.

That brings up the second point.

The designers placed the switch right at the driver's finger tips.  Some drivers used them as "fidgets".  They dithered the switch.  In other cases, shorter drivers had their seats farther forward and the hams of their left hand rested on the switch causing it to dither due to the jiggling of the road. 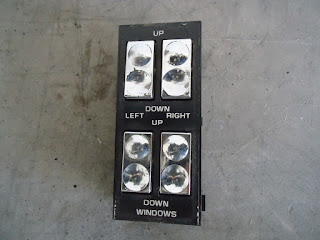 The problem was exacerbated when the designers insisted on giving the driver control of all four windows.  This block of switches guaranteed that at least one switch would be dithered.  And the failure of one switch forced the replacement of all four of them.

The switches failed like clockwork for the drivers who "fidgeted" the switch or rested the ham of their left hand on it...and that was a LOT of drivers.

To the best of my memory this switch was in production, unchanged, for over five years.  The problem was not addressed because the engineers who were being taken into the woodshed every year did not have the authority to change the switch.  They would make proposals like "Use higher temperature plastics beneath the bottom contact" or "Increase the size of the bottom contact" or "Increase the internal spring-rate to make it more work to dither and more resistant to the ham-hand effect".  In all cases the changes were never even investigated because the engineers were not able to make a clean-kill business case.  Each fix only chipped away at the failure rate.

The Paddle Switch
The internals of the paddle switch were entirely different.  Rather than a compression contact, the paddle switch had a knife-into-clevis arrangement.  The two leaves of the clevis are in compression and they wipe the knife blade as it drops into position.  The knife, in turn, scrapes the surface of the clevis leaves and removes oxides, cratering due to arcing, bugs, dried milk, soft-drink residue, dried vomitus and the other, normal detritus that can accumulate during operation.

Furthermore, the curvature of the approach to the clevis leaves and the distance they are from the plastic makes them extremely robust with respect to drawn arcs and "dithering".  This architecture is very similar to what you would see in the mechanical contactors that disconnect the juice in 480V junction boxes.

Another thing about the paddle switch is that its orientation and the forces required to activate the switch did not invite dithering.  The operator had to reach 6" for the switch but in this case 6" was as good as a mile.

Perhaps the final advantage of the paddle switch was that the designers did not have a "block" of them.  Presumably one failure drove the purchase of a simpler, $40 part.  But I don't know that because none of the 500,000 paddle switches that were installed in vehicles ever failed during warranty.

I don't think so.  I think it was the result of an organization that had become too big; an organization where authority and accountability had been separated in the pursuit of "efficiency".

Never attribute to malice (or planned obsolescence) what can be caused by stupidity.
Posted by Eaton Rapids Joe at 4:23 PM