Groundcovers for the orchard

We have three orchards around our property.  One is between the road and the house and is primarily pears.  One is out-back and is known as The Sahara Forest.

The third orchard is our "serious" orchard.  It is southwest of the house and on the highest part of our property and is mostly apples on semi-dwarf rootstocks.  Over time the layout mutated and we had trees die.  It got to the point were I either had to rejuvenate it or put it out of its misery.

I decided to rejuvenate.  I extended the footprint to the west.  I had been growing grapes but never seemed to harvest them.  Care of grapes was very different from how apples are managed.  I decided I liked apples better.  Apples pay their rent.

The last census of the Serious Orchard had 51 trees.  Some of them are rootstock awaiting grafting.  Relatively few have filled their allotted space.

The question we are gnawing on today is what to plant as ground cover.

Between the rows it will be a mix of grass and white/ladino clover.  You cannot beat sod for providing a firm surface for driving and walking over.

The question is, "What to plant between the trees in the row?"

Immediately adjacent to the trees there will be mulch and/or herbicide cleared surface.

I hate seeing all of that sunshine falling on nothing.

The candidates are
The second string

The basic plan is to knock the snot out of the nettles and motherswort and then plant "starts" of everything I can get my hands on from the list above.  Plant them all and let them sort out who owns which niche.

One of the incidents that initiated this train of thought is a conversation I had with a lady in a grocery store.  She was about my age.  Had been born in Germany.  Her father died when she was seven.  WWII was still felt in the countryside.  She grew up hungry.  One comment she made in passing was that the Dutch survived by eating tulip bulbs.

If you are making an effort to grow something, why not choose plants that can feed you should the need ever arise?

What a difference a day makes. 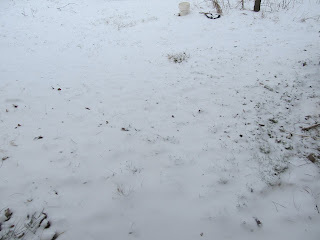 Most of the photos shown above were taken on my property on March 12.  This is what it looks like today.