Fertilizer plan for the orchard

The twig shown in the picture above displays three years of growth as delineated by the red parenthesis.

It takes sugar to make fruit.

It takes leaves to make sugar.

It takes Nitrogen (Nitrogen will be capitalized when I discuss it as a fertilizer) to make leaves.  Between two and three pounds of Nitrogen is needed to produce one hundred pounds of leaves (dry weight).

Shoot extension is one measure of nitrogen status.  "Real" fruit growers send a sample of leaves (usually just the leaf stems) into a lab to monitor the tree's nitrogen status over the growing season and make adjustments to their Nitrogen fertilizing program.  That is higher tech than can be justified by Salamander's 1/2 acre orchard.

Needs Nitrogen.  But how much? 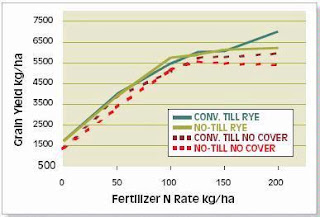 Most C-3 crops (in the mid-West) show flatted response to N applications over 200 pounds per acre.  By some happy accident, kg/ha is close enough to lb/acre to be almost interchangeable.  The 200 lb/acre number depends on rainfall.  More rain means more N can be used.  In dry years N response can flat-line at 100 pounds per acre.

One complication is that I do not want to fertilize the grass growing in the lanes between the trees.  More vigorous grass means more competition for moisture.  Salamander's orchard does not have irrigation.  A second reason I do not want to  run maximum N due to risk of fire-blight.  These trees have already filled their space.  A third reason is that excessive Nitrogen causes more suckers to grow.  Removing suckers is labor.

So how does that pencil out in a way that is grower friendly?

Consider that each apple has a canopy of approximately 15 feet diameter.  A 15' diameter circle has a shadow area of 175 while a 15' square has a shadow area of 225 square feet.  Or, said another way, each tree's canopy is approximately 1/200th of an acre.  That makes the math very simple.  Pedal-to-the-metal for N would be one pound of Nitrogen (approximately 2 pounds of urea at 46% N) for each tree.  I plan to fertilize at half that rate and broadcast one pound of urea per tree.

I figure that broadcasting the urea in late-April will catch the spring rains and the soil will be warm enough that all of the necessary biological things will happen to convert the urea to NO3--, the form of Nitrogen that plants can absorb.  I also hope that a late-April application is late enough that the urea will not leach down to the water table before the trees can absorb it.  For frame of reference, most years apple trees are in bloom on May 10 around here.  So I will be leading the duck by two or three weeks.

Then, next winter I can look at the shoot extension and make adjustments to the amount of N used.