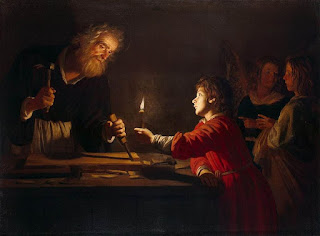 Catholics almost always used to name their children after saints.  The hope was that the children would "imitate" the virtues of that particular saint.

I was named after Saint Joseph.  He is a bit odd, as saints go.  He rates TWO feast days, March 19 (for being husband of Mary and earthly father of Jesus) and May 1 as St. Joseph the Worker...a bit of Vatican Cold War push-back against Communism's "Worker's Day".

Early in life I was a disappointment to my parents.  I did not have much of a work ethic.

That changed one day when I was 19.  My dad gave me a very short, graduate level course on economics.

He lectured me on the time value of money:  "Why dink around.  Take extra credits.  Get out of school early.  Make REAL money rather than 20 hours of minimum wages.  Graduating a half year early is like somebody giving you $30,000 (2017 dollars)"

He lectured me on velocity of money: "We are loaning you money so you can shoot through college as quickly as possible.  And then you will pay us back every penny because I have six more kids coming up behind you who need to go to college.  Every one of them will pay back the money to support the next kid. If any one of you cannot get up and moving they will run right  over the top of you."

Finally, he told me that markets determines prices, not the seller: "I know that you have a wide range of interests.  Some of them, like engineering, pay good money in the job market.  Some of them are a dead weight.  I know folks with Masters degrees in Horticulture who are mopping floors.  If you want to get a degree in Horticulture, you can jumpstart your 'career' right now by getting a 40 hour a week job mopping floors."  Incidentally, I am pretty good at mopping floors but I prefer better wages.

Very shortly after that pep talk I started to apply myself.

Posted by Eaton Rapids Joe at 3:30 AM