A modest proposal:  Modify the .30 Carbine to facilitate its use in firearms operated by simple, blow-back principles.

It is commonly believed that only low-powered cartridges can be fired in simple (read, inexpensive to manufacture) firearms with blow-back operation.

That is not true.


And the aircraft mounted version weighed about 65 pounds.

How did they make it work? 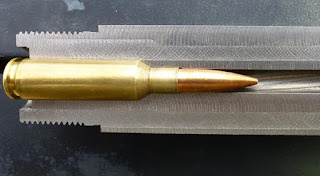 A typical cartridge looks like this when inserted into the chamber 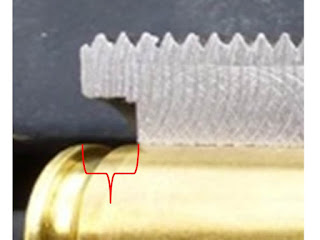 That would be catastrophic except that there is a tremendous amount of "beef" (well, brass) left in the casing for that very reason.
In blow-back operation the mechanism is never locked.  It uses the inertia of the bolt to react the forces pushing the bullet down the barrel.  That fact that the bolt is not locked into the receiver or barrel means that it is traveling rearward even as the bullet is still in the barrel and the gas pressure is still high.

If the bolt assembly of an M1 Carbine weighed the same as the slide on a Glock 19 (about 12 ounces) then it would travel back 0.36 inches or 9mm before the bullet exited the barrel. That means an additional 9mm of case would be unsupported and be required to contain the gas pressure.  This is a simple ratio thing.  24 ounces would result in 0.18" of travel, a 48 ounce bolt would result in 0.090" of travel and so on.

So how did the Oerlikon manage to handle the power and the pressure of the 20X101mm Anti-Aircraft round in a firearm with a functional weight?

"That means an additional 9mm of case would be unsupported..."  But what if the cartridge did not start out with five millimeters of case already sticking out of the chamber.  What if the cartridge had to slide rearward 4mm before it was even flush with the end of the barrel.  Then, 5mm (9mm motion .MINUS. 4mm sub-flush) of the cartridge would be protruding from the chamber as the bullet exited the barrel and the gas pressure blew off.  Five millimeters, just like a non-blowback, locked bolt design.

But what if...
But what if we did not use a mechanical extractor?

The fired round automatically extracts itself when fired.  That is what blow-back means.  The cartridge pushes the bolt back, not the bolt pulls the cartridge out of the cylinder.

One needs an extractor to clear the firearm of unfired rounds (very low force requirements) and clearing the spent brass in the case of a "squib" round. 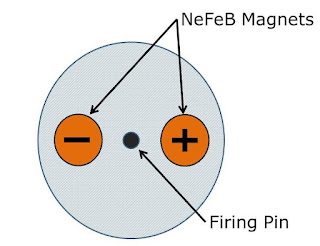 Something we have now, that they did not have in 1941 are NdFeB magnets.  Rather than screw around with mechanical extractors, why not specify the use of steel cased ammo and insert a couple of small diameter NdFeB magnets into the head of the bolt?  Incidentally, steel cased .30 Carbine ammo is both inexpensive and readily available.

In fact, one can increase the case capacity of the .30 Carbine case by about 10%  if you fully embrace the concept of magnetic extraction.  It entails completely eliminating the extractor groove and moving the interior geometry of the case (less the primer pocket) aft by 0.12" (3.0mm).

There is no extractor groove and the rim "edge" geometry is optimized for impact extrusion forming technology to eliminate any machining operations on that end of the case.

The case must be made of magnetic material (i.e. steel). 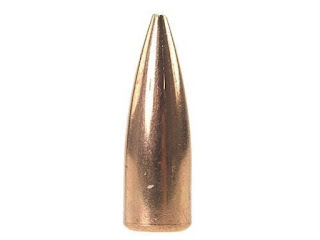 The only other update would be to increase the max COAL by 0.90" (2.3mm) so more aerodynamic  "varmint" bullets like the Speer 125 grain TNT can be used without unduly compromising the powder space.  The advantages of the more streamlined bullet are pretty big.  At two hundred yards, the 110 grain round nose retains 441 foot-pounds of energy compared to the 125 grain spitzer's 675 foot-pounds of energy.  That is a BIG deal.

Posted by Eaton Rapids Joe at 8:34 AM