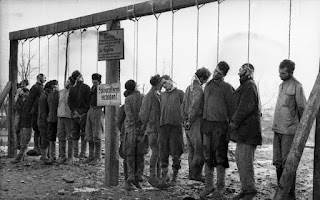 This is what real NAZI did.

They rounded up every able-bodied person in the neighborhood.  If you balked at getting onto the train to the "work camp", that was de facto evidence of partisan tendencies and you were summarily executed.


Hanging was the execution method of choice.  It was cheap and the "partisans" could be left on display to motivate others who might otherwise get squirrelly when ordered to enter the box-cars.

Many blame the Jews for not fighting back.  But if the census showed 100 able-bodied men in the neighborhood, the NAZI either tracked down the missing man or executed his family.  NAZIs might be evil but they were not stupid.

And, at least in the beginning before "the final solution", they really were sent to work camps.  They were not fed enough to stay alive but the the primary intent was for them (and displaced Russians) to produce war materials. 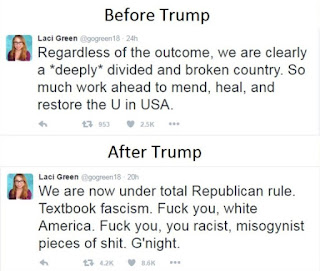 I invite Laci to look HERE, and HERE and HERE

Must be that we read different textbooks. The fact that she is allowed to publish such drivel is proof that we are not fascists or NAZIs.  Yet.