People who are tired suffer from tunnel-vision.

If you are aware of it you can make adjustments. If sleep deprivation is not something you are familiar with, or if you have never been in a demanding environment when sleep deprived, then are likely to think you are operating at 90% efficiency when you are only functioning at 45% efficiency.

Sheldon remembered to enforce convoy security. One SAW forward, one in the middle of the convoy and two in the caboose position. It is easier to shoot forward than to shoot rearward.

The vehicles non-gunship vehicles were immediately in front of the gunships. Then there was a 200 yard space, then another block of vehicles.

Better to lose a flatbed than to lose two squads of fighters or a gunship.

The convoy made good time to the destination. They covered the twenty miles in about an hour.

Before pulling off M-43/Saginaw Hwy, Sheldon radioed in. “Confirming we are at 8646 West Saginaw Hwy. Confirming Fairhaven Apartments. Are you SURE this is the place?”

Shrugging, Sheldon made the universal signal for “Get on with it”. He raised his hand, extended his index finger vertically and rotated it. It never occurred to him that he could have just sent a scouting force.

The convoy entered the drive

A few sentries fired at the convoy but bursts from two of the SAWs made them flee.

Sheldon sent a full squad down the ramp into the underground parking. 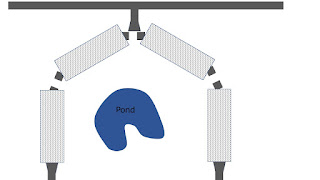 A couple of minutes later, most of the squad popped out of the southeast entrance. The buildings were arranged in a horseshoe with one entrance in the southwest corner of the property and the exit in the southeast corner.

“Lots of good shit there, boss.” the squad leader confirmed.

Then Sheldon took a stroll.

The each of the four buildings had its own, brilliantly lit, underground parking garage. The first one he entered had HUNDREDS of barrels. The air was redolent with the smells of gasoline and diesel. “Did you check the barrels to see what was in them?” Sheldon asked.

As an answer, the squad leader unscrewed the plug in the top of one of the barrels and stuck his finger into the liquid. Pulling it out he said “Smell”

"Shit!" Sheldon exclaimed in resigned disgust. "Tell the troops to dump all the bags of grain on the ground. We gotta make room for these barrels."

“Once they get the trucks cleared off, tell them to pull the flat-beds in here and start loading.” Sheldon said.

“Anybody find any weapons or ammo?” Sheldon asked.

“Lots of pallets.” the squad leader said, pointing behind the densely packed barrels. “Hard to know what is in them.”

The pallets were wrapped with layer-upon-layer of stretchy, shrink-wrap plastic.

“Is there cargo in each of the garages?” Sheldon asked.

“Tell the drivers of the flat-beds to space out, one to a building.” Sheldon said. The last thing he needed was to have tired, clumsy troops tripping over each other.

Almost miraculously, each garage had a set of ramps and a single appliance dolly. It was going to take a while to load.

“We have reports of Mr Heavy forces breaking off and heading north. We suspect that you were seen and they are coming to defend the warehouse.” Wendy said.

“You might want to pick up the pace. You will have company in less than an hour...maybe as soon as thirty minutes.”

“Get all the fighters in here. They can start muscling the barrels up to the flat-beds.

A minute later, the only red forces not in the underground garages were the four fighters manning the pintle-mounted Squad Automatic Weapons in the beds of the armored trucks.

That is when Janelle triggered the first set of charges.

Military has the advantage of being able to test, test, test and access to exotic chemicals.

Janelle had neither of those luxuries.

Dispersing large volumes of fluid so that MOST of it mixes into the ideal ratio is very difficult.

Air is surprisingly dense. The amount of air in a medium sized refrigerator (13 cubic feet) is approximately a pound.

By Janelle’s calculations, a five gallon bucket of gas needed a plug of air eight feet tall with a diameter of about thirty feet. It would take more than twenty-five, five gallon buckets to fully utilize the air beneath ONE of the apartment buildings.

Another complication was the mixing. Simply exploding a charge in the center of the bucket would atomize the fuel but would be inefficient at mixing it with the air and would likely result in much of the fuel painting the floor and ceiling rather than mixing with the air.

Janelle configured the dispersal charge to minimize the up-and-down pulse but there was no way to eliminate some of the fuel wetting concrete. It helped that the fuel-bombs were on top of 55 gallon drums, helpfully disguised in buckets that originally held motor oil and hydraulic fluid.

A third complication is that explosions first evacuates the air within the space followed by a massive air in-rush. The best time to detonate the air-fuel fog is when the maximum amount of air has in-rushed.

A forth complication is the difficulty of synchronizing the detonation of multiple charges.

Janelle threw up her hands. She reverted back to a ditty she learned when she first started hanging out in machine shops. “When in doubt, make it stout, of stuff you know a lot about.” When brute force does not work, it probably means you did not use enough of it.

Where two, five gallon buckets of gasoline might have been more than ample to create a pressure pulse that would incapacitate the hostiles, Janelle decided to use eight in each underground parking space.

She insisted that they be wired in parallel. She insisted on two car batteries wired in series to generate 24V which closed redundant relays which fired the airbag inflaters

The inflaters, shorn of everything but the electronics and explosive capsule were nested in the Tannerite and Janelle hoped they would be sufficient to detonate the four ounces of Tannerite.

Upon hearing that Benicio’s people had flash-bang grenades, she had two of them lined up near the emergency exit at the top of the horse-shoe, ready to dash down the ramp and lob grenades into the garages in the event the air-fuel bombs did not self-detonate.

Which they did not. Gasoline is formulated to be difficult to ignite. That is what "octane" means. Low octane causes engine knock, lost power and can destroy pistons.

The grenade launchers did succeed in lighting off the twenty million BTUs of gasoline-air fog.

Benicio was very grateful. He awarded the grenade launcher’s next-of-kin with two year’s worth of pay.

The peak pressure was less than the pressure at Kate’s store but, contained by the mass of the concrete structure, was of much longer duration. 45psi is fatal. 150psi leaves an ugly corpse. 600psi shot the men into concrete walls like 150 pound bumblebees hitting the windshield at 200 miles per hour.

SAW armed trucks liberated from the strike force that invaded Capiche and the mortar crews set-up beside them made short work of the shell-shocked trucks guarding the entrances to the underground parking. Having arrived early, they had the advantage of sighting in and were dialed into the range where guard trucks HAD to be.