Lessons learned at the chrony

The .38 Special I have been reloading for stayed in the ERJ fortress overnight so I could reshoot it over the chronograph as Old_NFO suggested. Old_NFO probably gets tired of hearing it, but he was absolutely right.

The chrony was moved to the far end of the picnic table with a half-round of ash log for the backstop. The results were closer to expectation. The median value was 866fps.

Revolvers are funny beasts. Every chamber in the cylinder is a system unto itself, especially in older or low-end firearms. 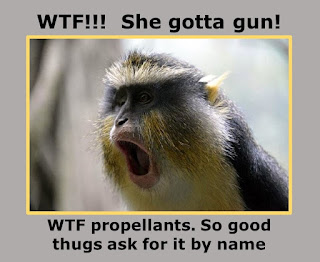 A max load of WTF! powder that shows 920fps in the load-book will nearly always print much lower out of a real revolver. Two factors come into play. The load-book data is taken from a solid, one-piece barrel while revolvers have a gap between the end of the cylinder and the back of the barrel. It is a leak. In fact, a six shooter has six, unique gaps.

The other factor is the barrel length. A revolver with a 4" barrel has about 1-1/2 of chamber that acts like a barrel and then an additional 4" of real barrel for a net 5-1/2" of barrel. Depending on the source of the data, the reported velocities might be from a 7" to 10" barrel.

All of that is the prelude for what happened next.

That handgun may have been with me last night when I took a walk out-back with the dogs.

It may have happened before.

I am happy to report that last night is the first time I was able to get the firearm out of the holster in time to fire a semi-aimed shot at a fleeing rabbit. Not just one shot...but TWO shots.

What I learned from the (number redacted) failed attempts is that a shootist must anticipate when he is going to need to shoot far sooner than commonly thought. The time to unsnap the holster and get a hand on the grip is when the dogs' body language says "Hey, something interesting might be about to happen."

And it is time to have it out and at low-ready before the dogs' body language says "It is going down!"

I assume the same need-to-anticipate applies to social situations. It is way too late to start thinking about shooting the rabbit when it is moving. I will obviously have to pay far more attention when I am in social situations.

I didn't hit the bunny even though it almost ran over my foot. I do remember having the front sight cross over his path as he was accelerating and getting one shot off as he was coming at me and another as he was scooting away.

Great fun, except for the rabbit.