How much physical decline is inevitable with age

Minimum qualifying times for the Boston Marathon for men. Hard-core marathon runners are near the high-end for human endurance performance. 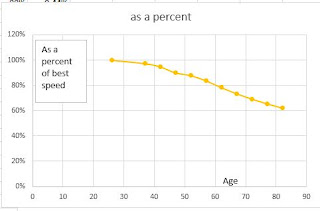 Same as above but expressed as a percent. For example, as a man in the 60-65 age group and if I had taken maximum care of myself, my cardiovascular-pulmunary function could be expected to be 80% that of an 18-to-34 year-old me.

Stated another way, measured from the middle of those two age-spans, I can would lose 20% of my maximum endurance performance over that 36 year interval.

That is a much smaller number than I expected and I presume my flagging endurance is related more to the amount of extra lard I am carrying around and my increasingly sedentary habits than due to the inevitable programming of age.

Maximum endurance includes a bunch of factors but primarily the maximum volume of oxygen your lungs can transfer from the atmosphere to your blood stream.

Other factors include your liver's ability to cleave glycogen into glucose, your ability to sweat and dissipate heat, circulation in your muscles, pain tolerance and so on.

Posted by Eaton Rapids Joe at 9:04 AM