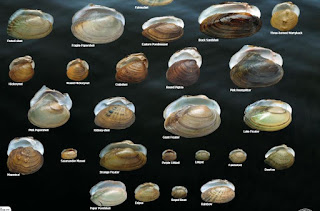 The Giant Floater (Pyganodon grandis) is one of the largest with adult specimens topping out at 7"-to-10" in length.

Giant Floaters are common in the eastern United States and southeastern Canada.

Giant Floaters are unique for a variety of different reasons.

Giant Floaters do not demand a rocky bottom. Species that demand rocky bottoms are usually restricted to rapids in rivers and creeks. In fact, Giant Floaters thrive in soft-bottomed ponds, a fact that can be attributed to its light-weight shell. Heavy shells would cause the organism to sink through the bottom into anaerobic regions and thence perish.

Giant Floaters are exceptionally fast growing for a freshwater mussel. They would grow even faster if they were fed.

Giant Floaters, like all mussels, are exceptionally good indicators of environmental quality. They absorb heavy metals and because they cannot relocate quickly, they are vulnerable to every environmental shock.

The life-cycle of the Giant Floater is bizzarre. It moves from larvae to a parasitic stage that lives on the gills of free-swimming fish to free living juveniles to full adults.

Some mussels are very selective in the fish species their glochidium (the parasitic stage) will live on. Others are generalists. The Giant Floater is a generalist and its glochidium have been found on Channel Catfish, Bluegills, Sunfish, Largemouth Bass, various minnow species, Yellow Perch and several minor, small species.

Mussels have a clever way of attracting host fish so they can inject the larvae into their gills.

When the larvae that have been maturing inside of the mussel are ready to attach to a host fish, the adult mussel grows a temporary lure to attract the preferred species and the mussel injects a blast of glochidium into the fish's mouth when it tugs on the "lure". 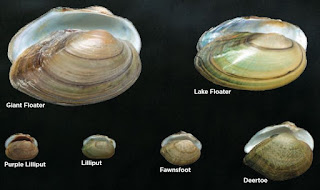 A close-up showing the size differences between the Giant Floater and some of Michigan's smaller species of mussels.

While wild-grown Giant Floaters are protected in Michigan, I wonder if there would be a market for aquaculture grown "floaters". They don't look like they would be difficult to domesticate as long as you can keep the raccoons, mink, otters and muskrats from eating the profits.