Every firm had various levels of “Injun-Country” rules. Every firm had slightly different titles for the sets of rules and every set of rules had some commonalities.

Since workers in the petroleum industry are very mobile (forgive the pun) in terms of the firms they work for, the guys in the field don’t use the formal document names. They call them “Injun Country” rules, even the Native-Americans.

There is one set of rules for Islamic countries where drinking alcohol and consorting with the opposite sex is illegal.

There is another set of rules for regions where sanitary measures taken for granted in developed countries are absent.

And there is a set of rules for operation in places torn by terrorism and civil war. It was this last set of rules that applied to Brett’s men.

Some of the rules were annoying. The vehicles had to be washed everyday after leaving the work-site. Vehicles had to be parked pointing nose-out to facilitate quick egress and to make it more difficult to identify rental/out-of-town vehicles by simply cruising through parking lots.

A minimum of three different routes between the hotel and work had to be randomly alternated.

Some of the rules were not that big a deal. Work-days were standardized at 13 hours with an hour of overlap at each end. That avoided the Sargasso Sea of bad-luck-and-stupid between midnight and 3:30AM when many “accidents” happened.

Drinking was not prohibited but it was restricted to two drinks, had to be done in a locked motel room and the drinker had to be “in” for the evening.

Meals had to rotate between restaurants and the number in rotation could NOT be seven. For that matter, six and eight were frowned upon. A target is harder to "pattern" when the restaurant he customs shifts back two days every week then when he shows up at the same fish-fry every Friday. Many employees chose to cook in their rooms.

Even though the behaviors of the men changed markedly, they would still never be mistaken for a Southern Baptist convention. The men were bigger, fitter, tanner, younger and much more sloppily dressed than the typical preacher.

Brett’s firm had no policy on personal defense weapons. Mikhail decided his employees were adults and could decide for themselves. Mikhail's company was an exception.

Brett’s team chose to ignore the fact that Connecticut does not recognize concealed carry permits from other states.

In Louisiana, Texas or Oklahoma any sentient adult would have recognized a group of mature men (and women) who watched people more than the big-screen TVs or their smart-phones; adults wearing large, floppy shirts that weren’t tucked in...they would have been recognized for what they were. A team of men not to trifle with.

In Connecticut they were simply dismissed as “rubes”.

Mayor Wagner had egg on his face. He had made a mistake and it was a lulu.

Not only had he made a mistake, he had rolled it out to the public. Both his personality and his business experience told him that the sooner the mistake was corrected the sooner it will be forgotten.

“Hey, I need to talk to the leaders again. Same deal. Pop free in twos. Figure out your own coverage” the Mayor rotated his team.

Once again, Jarrell was in the first team to be briefed.

“Do you remember the first briefing when I told you more adjustments would be made as we got smarter? I said something like ‘we will roll them out on-the-fly?” the Mayor started out.

Jarrell nodded. He remembered. Even if he had not remembered the Mayor was making perfect sense. Things were chaotic in the beginning and now things were settling down and actions could be refined.

“I made a mistake. A simple math mistake. Richards down at the power-plant caught it.”

Richards was the city worker responsible for the TLC of the two, ancient, reciprocating engines that provided back-up power. The engines were WWII vintage marine engines and had been upgraded through the decades as controls became more advanced.

Jarrell asked “What does that mean in real terms?”

Roger, the other crew lead that had reported for the briefing said “That is GREAT news!”

In fact, it was great news. It took the electrical availability during the two-hour, planned black-outs from the level of the average citizen of Bangladesh to double that of Mexico’s. 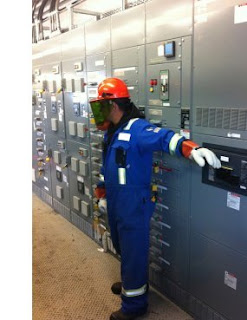 The other good news the Mayor had to report is that the Journeyman electricians crapped all over his plan to have them pull breakers (as required by the governor). No way in hell were they going to leave exposed conductors in the breaker-box and there weren't enough "dummy plugs" to go around. *

They had walked each home-owner through the process to shut-down a breaker. First, shut off all load at the appliance, either at the thermostat by turning it down or at the on/off switch. Then, when turning off the breaker in the breaker-box to not stand in front of the service box. Rather, to put their fingers on the breaker in question, step to the side and flip the breaker off with their faces turned away from the service box.

Arc-flash hazard is a real thing. If the box explodes, it explodes away from the wall and you don’t want to be in front of it when it goes. Metal slivers in your scalp are preferable to shrapnel in your eyeballs.

Once the breaker was in the “off” position, they secured it with duct tape. The duct-tape wouldn’t stop anybody from flipping it on but it would serve as a reminder as to WHY the breaker was off.

Reactivating the circuits that had been taken down to conserve energy would be a relative snap to bring back on-line as the process was simply reversed.

The satchel of explosive was in the room beneath the bedroom of Brett’s suite. The bed had been moved and the charge laid directly on the poured, concrete slap of the floor.

Unbeknownst to the attacker, Injun-country rules had the oil-men dispersed around the hotel. Not only that, but they changed rooms every three nights to elude targeting.

Brett’s new room was on the other side of the hotel.

A single-mother from Hialea, Florida was not so lucky. She was touring Ivy League campuses. She was on the brink of fulfilling her life-long ambition.

Additionally, a half-dozen gamers were vaporized by the charge. They were at a gamer’s convention and were taking advantage of the hotel’s blistering fast internet (available for a $5 a night upgrade). They were furiously bounding on their computer keyboards when the charge went off. Their motto had been “We can sleep when we are dead”

* A tip-of-the-fedora to Tanker over at Mostly Cajun for helping me with the Arc-flash bits. All errors are mine. I blame it on having cold fingers.