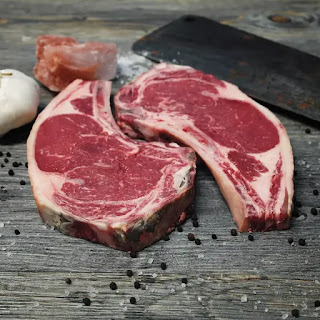 We are all familiar with "white fat". It is the fat seen in meat.

We are much less familiar with "brown fat" because it is most common in newly born animals and even then is less than 10% of the newborn's fat reserves. 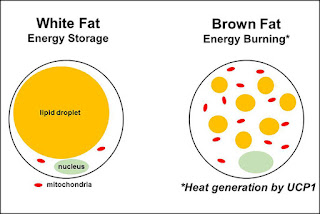 Brown fat is very vascular and heavily laced with mitochondria. Its sole function is to create heat.

Imagine a seven pound lamb, still wet with amniotic fluids and landing on 35 degree F sod. And the nearly all live. Their brown fat is the furnace that keeps them warm until they dry off and get a tank-full of milk.

That is all very academic if brown fat only exists in newly born farm animals.

Research indicates that adult humans also have small (typically) reserves of brown fat and that tiny amount of BAT has many, interesting ramifications.

The obvious implication is that it can generate heat. It burns-in-place, no shivering required.

A second implication is that it greatly reduces the risk of Type II diabetes for assorted reasons.

Perhaps the most seductive reason for wanting to recruit brown fat is that it burns calories without exercise or muscle pain or the need for special equipment. Just lower the thermostat and the body-fat metabolizes to supply the brown fat sites.

Personal story: I ate Pepperoni pizza Friday evening. I went to bed and I was burning up. The bedroom was 63 F and I was above the covers and wearing a tee-shirt. I was HOT.

Everybody knows that eating fat is important to staying warm. I became curious as to why that might be.

The high-fat meal activated my BAT via the bile acid storm released by my liver. My adnoids and tonsils sensed the high fat content and my digestive system carpet bombed my gut with bile. Bile is reabsorbed and transported back to the liver via the bloodstream. The spike in bile acids in the blood stream lights off the BAT furnace.

The amount of brown fat in our body varies through the year and as we age. In general, some of our white fat converts to brown fat when we are exposed to cold. One study showed that ten days of 66 degree F (while wearing light clothing) was enough to change measurable amounts of white fat to brown fat in 23 year old men and women.

As we age, our tissues become less plastic and the conversion is slower.

The conversion of white fat to brown fat is one of the mechanisms that acclimates us to cold weather.

Another way to convert some white fat to brown fat is through significant amounts of intense, aerobic exercise. Think about all of those fishermen and whalers in the North Atlantic. The thermal demands on them was not that different from that of the newly born lamb landing on the cold dirt.

Wouldn't it be great if there was some food (other than fats) that stimulated the conversion of white fat to brown fat?

Asian researchers found one: Hot Peppers. when western researchers attempted to replicate the study, they found that volunteers in Europe and America were unable to eat the amount of hot pepper that people from Korea, Japan and Thailand were able to eat. 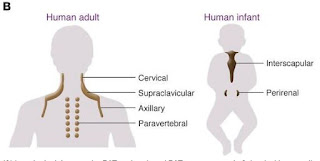 If your primary interest in brown fat is in staying warm, then one ought to invest in "bomber hats" and scarves so the heat that is generated by the primary adult BAT deposits on the sides of our neck and above our collar-bones remains in our bodies and doesn't radiate or convect away.