Is Antifa a paper-tiger?

I did multiple image searchs for this post and I found huge crowds of Antifa supporters.

The odd thing was that those huge crowds were not of demonstrations in the United States.

When I restricted the image search to demonstrations in the United States I found some high-impact images like the one shown above.

But does the image withstand close scrutiny?

Let us assume that the photographer was a good journalist in the sense that he/she/it was attempting to maximize the dramatic impact of the image. That is, they were not attempting to minimize the number of Antifa members.

Further, let's assume that the Antifa members are on the move and had strung out into a tadpole shape. Combining this with the first assumption leads us to believe that they captured the head of the tadpole, in all, about thirty Antifa demonstrators. 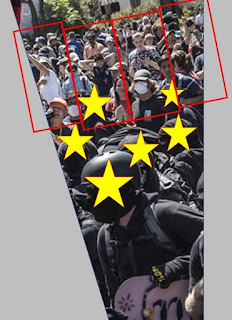 To make this easy, I grayed-out regions to make a keystone shape that simulates the effect of perspective and I put yellow stars on the Antifa demonstrators. For those of you who labor under the handicap of common-core math, there are six stars.

Next, I put red boxes around blocks of approximately fifteen people. Four blocks of fifteen represents 60 people on one side of the marchers.

For this static, frozen instant in time, there is a gawker/Antifa ratio between 10:1 and 20:1 depending on whether there is an equal crowd of gawkers on the side of the demonstrators where the person who snapped this image is. In the interest of being conservative, lets take the average...15:1 ratio between gawkers and demonstrators.

Furthermore, if Antifa is marching, there are likely gawkers lined up-and-down the street which suggest many multiples of that 15:1 ratio.

California is the most populous state in the United States with about 40,000,000 legal residents. Perhaps the very biggest Antifa demonstration had thirty-ish demonstrators turn up.

Small towns like Eaton Rapids (population 5000) have churches that sponsor co-ed softball teams. I believe that any two of those church teams, if flown to California with their normal softball gear could take the Antifa demonstrators shown above in 98-times-of-100 if it became physical.

That should tell you everything you need to know about how badly elected officials hung law-enforcement out to twist in the wind after betraying them with eviscerated rules-of-engagement and catch-and-release policies. 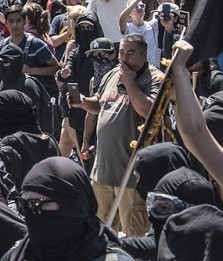 Caveats: Antifa much bigger in Europe as most of Europe realizes that Germany won WWII. It took them seventy years but they ended up winning.

BLM does appear to be a home-grown organization with the ability to generate massive, grass-roots support.