The Lucky Gunner has several pages where they tested various bullets in ballistic gel.

I noticed something interesting when I looked closely at the lead, 158 grain semi-wadcutter hollowpoints. The denim material had embossed the surface of the bullet.

This is a second mechanism that resists the bullet expanding.

When the denim embosses into the soft, lead surface it forms a mechanical interlock and the denim functions as a membrane-in-tension and holds the impact surface together.

That poses a dilemma. If the material is hard enough to resist embossing it is too strong to disrupt at "snubby" velocities. If it is soft enough to expand then it is vulnerable to the denim embossing the material around the hollowpoint and inhibiting expansions. 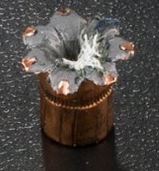 Jacketed bullets mitigate the problem by wrapping the jacket around the opening of the mouth thus presenting a smooth, hard copper/gilding metal surface to the denim. Then they mitigate against the reinforcing effect of the copper by scoring it so it is not capable of carrying the load as hoop stresses.

One ways to mitigate against the embossing effect is to decouple the denim from the lead surface with a "tear-away jersey".

If one were to fill the cavity with Permatex 81730, some material slumps out of the cavity and leaves a 0.050" (approximately) layer of soft, rubbery material.

This material is so soft that reloading the bullets into the case bruises it so it is best applied AFTER the hollowpoints are reloaded into the case.

Another way to decouple would be to cover the front of the bullet with a double layer of parafilm or some other poly/wax film. Nothing is slipperier than two layers of polyethylene film with oil/grease between them.

Obviously, the plastic film will not stay where it needs to be if you use grease or oil. But under high pressure and shear, wax acts almost exactly like grease.