The newest members of the ERJ family 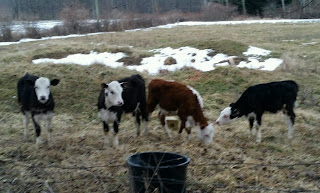 They are about 250 pounds each. The fellow who sold them to me had them on concentrate (grain) but they seemed to know what to do when the got on the pasture. I think it will take them a few weeks to a month to get their rumens stretched out. So that is how long I will continue to supplement with cracked corn.

They are Holstein/Herford crosses which are not CoyoteKen's favorite but they came as a package deal, delivered. I got a call at 8:00 last night and my friend's kid asked, "I heard you were looking for calves. Is that all talk or do you mean it?" The calves showed up at 11:45 this morning.

Belladonna already named them. The biggest steer is "Brutus", the smaller one is "Ted" after Ted Danson who was pummeled for appearing in black-face once. This Ted balances the scales since he is in white-face.

The black heifer is "Lucie" because of her bowel habits and the ginger is "Millie". I can tell already that Millie is going to be my problem child.

The low for tomorrow night is projected to be 12 Fahrenheit. I plan to spread some straw on the ground as soon as they decide where they like to hang out. I might also move a couple of round bales of hay to provide a half-azz windbreak.