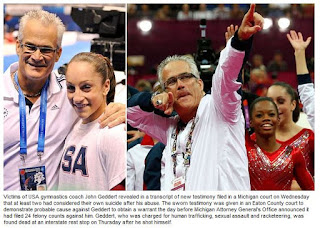 Michigan State Attorney General had  press conference announcing that a  prominent coach had been indited on 24 felonies involving human trafficing, sexual abuse of minors and so on.

My first reaction was "Well, that saved the public a lot of money."

My second reaction was "Just like Epstein, we will never know who else was preying on these vulnerable, young women and their eager-for-glory parents."

What public good was served by the Attorney General's very public accusations. All I see is harm. No connecting the dots and bringing enablers and co-conspirators to justice. No certainty in the closure for the victims.

No promise of trial-by-peers and purity-of-evidence. The AG convicted in a trial-by-TV camera. That could be any one of us deplorable, right-wingers with scary-facial-hair and camo clothing.

Posted by Eaton Rapids Joe at 6:59 AM