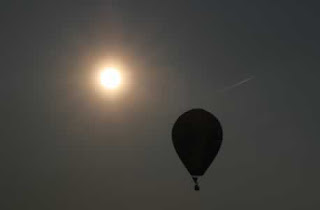 The attack was coordinated, devastating and extremely economical.

Weather balloons filled with natural gas (less easily traced than large quantities of helium) dragged an octopus of fine wires and cotton string into the high voltage lines feeding power from the power plants into the grid.

The wires arced and charred the cotton lines. Photo-diodes at the base of the balloon sensed the first sign of arcing and detonated charges on the tops of the balloons allowing the trailing lines to drop into the power lines on the far side.

The transmission lines were spaced to prevent arcing at 100% humidity and a densely packed flock of geese flying through the wires...and a hundred percent factor of over-design. The design requirements never comprehended the possibility of terrorists deliberately creating shorts across the lines.

Hundreds of thousands of volts surging through the wires and carbonized string, first vaporizing them and then converting them to highly conductive plasma.

The blast of energy easily severed the transmission lines that carried the power from the plants and the plants dropped into emergency shutdown mode as thousands of megaWatts of power instantly had nowhere to go. Think of a Corvette accelerating at full throttle suddenly being thrown into Park.

In the space of 90 seconds, three nuclear power plants, six conventional plant and 50% of Michigan’s ability to generate electrical power were taken off-line. Some of it would come back on-line quickly. Some would take longer as transformer plates were warped in the emergency shutdown and full power could not be restored until those units were replaced.

Pre-Covid, there had been an 18 month waiting list for transformer rebuilds. The rebuild schedules were now listed as "open", meaning "we will get to it when we get to it".

Simultaneously, six pipelines feeding natural gas from Indiana and Ohio were severed with explosives. Compressed natural gas is like compressed air. It is a big spring that contains much energy.

The release of the gas created big craters and in a couple of cases, enormous fireballs.

A large portion of Port Huron, Michigan was obliterated when the pipelines feeding natural gas from Canada to the mid-west were severed.

30% of Michigan’s electrical generation was powered by natural gas. It did not shut down immediately. Michigan has depleted gas fields and natural gas is pumped into them year-round and tapped for the high use winter months.

Being the end of February, the fields were nearly tapped out. Nearly, but not completely.

The agents responsible for the actions that jeopardized 80% of Michigan's electrical generation capacity had done so for the glorious sum of $900 out-of-pocket expenses (not including travel costs).

The lines between Indiana, Ohio and Michigan would be up and running in a few weeks. The lines from Canada would take many months to repair because the damage extended to underwater portions of the lines.

The governor was awakened at 2:00 in the morning. She was not in a good mood. In retrospect the third gin-and-tonic had not been a great idea.

Her first media appearance was at 5:30 in the morning. She still had almost no hard information. Strength is drawn by strength. The less she knew the more emphatically she projected her message.

“These attacks were executed by right-wing terrorists acting on behalf of the former President of the United States” she declared with absolute certainty.

“Steps are being taken to track down these terrorists and bring them to justice.”

Except it wasn’t right-wing terrorists. And the people who executed the attacks were NOT happy that they had not been given credit. And they had far more than $900 in their war-chest.