A short history lesson with pictures

Politicians favor gun control because they believe that it will eliminate citizens' ability to remove them from office using methods not mentioned in the Constitution. They are also protective of their proxies and don't want them to suddenly sprout leaks.

History suggests that firearms are not required, that this problem has been studied for thousands of years and many alternatives exist, sitting on the shelf just waiting for us.

Here are two of those alternatives, presented for educational purposes.

All it takes to make a sling is the tongue of an old boot and a couple of laces.

The commonly accepted maximum range is between 300-and-350 yards. You read that right; Yards, not feet. Works better against massed formations than targeting specific individuals when used at-range. Consequently this is a better tool for installing leaks in proxies than for targeting specific people.

Working backwards, that suggests a release velocity of 175-to-200 feet-per-second.

Part of the magic involved the use of glandes or purpose-made projectiles.

The size of the glandes varied wildly, presumably due to ad hoc patterns used when making them on-the-march. Five hundred years of evolution under the Greeks and Romans suggests that 2 ounces (60 grams) is a good, all-purpose weight. For reference purposes, the hardball used in baseball weighs about five ounces.

Not than any of you need more hobbies, but there are history buffs that practice slinging. Commonly used projectiles include 2-oz egg sinkers or HERE

Other alternatives include a 1-1/2' length of 1/2" copper tubing filled with lead or a 1-1/2" length of 5/8" rebar. If the home-caster uses a 2" length of copper tubing and leave a 1/2" unfilled on one end, then the glandes becomes a dart and will eventually stabilize and fly filled -end-forward.

Using a release velocity of 185 feet-per-second and a 2 ounce projectile, the projectile has about 65 foot-pounds of energy at release. That reality checks as the slinger would have to generate about 30 pounds of force over a 2' arc to impart that kind of energy and that seems entirely plausible. 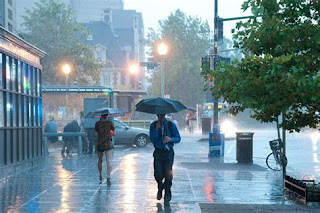 Are they going to outlaw umbrellas?

Umbrellas were favored by Bulgarians for the clandestine installation of leaks. Bulgarians were employed by the Soviets for "wet-work" when the Soviets wanted to maintain a slight distance or did not want to risk their own assets.

Look up Bulgarian Umbrellas. Who knew it was a thing?

Posted by Eaton Rapids Joe at 8:43 AM